FlipPix Art is a series of picross logic puzzles created by GabySoft for mobile markets, including Android tablets, iPad, and NOOK Color/Tablet. The games are designed for ease of use while on the go, employing a rather unusual control mechanism that, surprisingly, makes mobile picross easier and less error-prone. On top of that, each of the games in the series features a different visual theme along with a large number of puzzles, making it one of the best ways to get a picross fix while on the go. 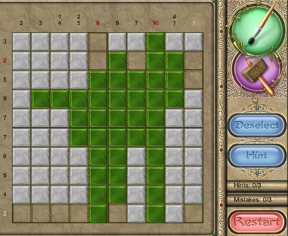 The idea is very simple: complete a series of pictures in sets of themed levels by solving grid-based picross puzzles. Using the number clues on the top and left sides of the screen, you can determine which blocks need to be filled in and which need to be removed. Simply tap and drag to mark individual squares or entire lines, then choose the paintbrush or the hammer icon on the right to mark or destroy tiles respectively. It's a little different than the usual "touch to act" controls most picross games utilize, but because your actions are only counted when you hit the side buttons, you're far less likely to make an error. It makes you solve puzzles in a different way than you might be used to, as it's more cumbersome to switch between marking styles on the fly, but the adjustment is a small one and won't affect your picross prowess in the end.

Each of the themed FlipPix Art games features a unique theme and its own set of puzzles. At the time of writing, GabySoft offers about half a dozen FlipPix Art games, including Zoo (nine puzzles), Model Plane (39 puzzles), Home (136 puzzles), Nature (over 50 puzzles), Castle (219 puzzles), and Kids (easy picross for the young ones). Prices vary between marketplaces and versions, but there are both paid and free games for every device, with a small download to initiate after you get the app.

FlipPix Art comes across as a bit inelegant in its visual design, but it's nothing that really detracts from the experience. The challenge level isn't too high, either, considering the small puzzle size (5x5, 10x10, 15x15) and relatively simple design of each grid. Still, despite not being the most perfect picross game around, the amount and variety of logic puzzles available makes any FlipPix Art game a great way to scratch the logic puzzle itch while you're out and about!