The business of fixing dreams is a delicate one. It requires a lot of time and energy, the clients are few, and let's face it, the pay probably isn't that great. That doesn't stop a young woman from helping out her tormented friend, Victor, from sussing out the source of his nightmares by traveling within his world of dreams. Foreign Dreams is a visually stylish hidden object adventure game that lays on imagery and mystery in its unusually-crafted world. As you follow a frightening young girl through Victor's dreams, you begin to piece together a bit of the puzzle surrounding the source of his nightmares. 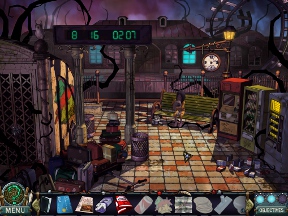 Foreign Dreams follows a very simple structure that is divided into dreams that contain a number of scenes of their own. You start out by visiting one of Victor's nightmares and looking for fragments of imagery laying around the rooftop. Click on objects that are shown by silhouette at the bottom of the screen to collect them. Occasionally you can zoom into certain parts of an area to find more items. You'll also discover new pieces of information that can add to your list of objects to find, all of which are stored in a scrolling bar at the bottom of the screen.

Keep your eyes peeled for anything that looks out of place, as Foreign Dreams often requires you to backtrack a few steps to find items that complete new puzzles. To exit a dream, for example, you must locate pieces of a dreamcatcher. These pieces can be found throughout the dream's previous scenes, so if you were paying attention the whole time, you can quickly zap back and pick them up. If you get stuck, the hint system is pretty smart, so no worries!

There are lots of mini-games to complete in Foreign Dreams, most of which are fairly standard in the casual gaming world. Jigsaw puzzles, tile arranging puzzles and the like help string together scenes into a cohesive whole, each one directly related to the dream at hand. 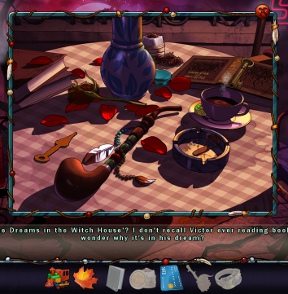 Analysis: Unusual in construction and style, Foreign Dreams slips under most radars simply because it doesn't follow the "make a spooky story with vampires/wolves/ancient relics and add laundry lists of items to find in the jungle" format. It doesn't try to be epic with its storytelling or design, instead offering a rather straightforward experience with mystery and charm around every scene.

Foreign Dreams runs an average length for a hidden object adventure game, clocking in at three hours or more, depending on your skills at finding items. Unfortunately, because of the game's thin structure, many of the latter dreams feel repetitive since they follow the same format as the dreams before it, making the last half of the experience feel stale.

Foreign Dreams uses a lot of imagery to tell its story, and rightfully so, seeing as how most of the game takes place in the symbolic world of dreams. All of this is shown with the game's intriguing art style that makes heavy use of dark, cool colors and thick-lined objects, giving it a hand-drawn manga sort of appearance. The animations even look great, distracting you from the sometimes-awkward excuses the main character finds to stay and look for objects instead of continuing the story.

Foreign Dreams isn't a perfect game, but it tries something different and does so with a charming sort of style. You'll love the imagery, the references to popular occult figures, and the visual style from beginning to end!