It's cold outside. There's no kind of atmosphere. We're all alone, more or less: the last survivors of a Federation force nearly annihilated by the Rebels. We possess vital intelligence that must be delivered to the nearest Federation base.

But that's seven sectors away, and the Rebels are expanding their search for us by the hour. But heck, crews have faced worse odds before. Not survived them, mind you, but faced them. Let's see how we do. Described as a "spaceship simulation roguelike-like" by its developer, Subset Games, FTL: Faster Than Light hopes to recreate the nuts and bolts atmosphere of a spaceship exploring the void of space. You'll be spending less time boldly going where no one has gone before, and more time directing crew members to fix the oxygen re-circulators, because even if the engine room is on fire and the sensors are blocked by the nebula outside, there's no way you'll make it to the next supply outpost if you aren't breathing. And it will be awesome! 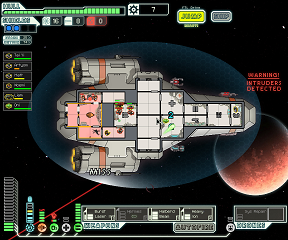 The general goal of FTL is to guide your ship through each sector of the galaxy, making it to each sector's exit beacon before the pursuing Rebel catch you. When your FTL drive is ready, you'll consume a unit of fuel to "jump" from beacon to selected beacon, coming into contact with trading outposts, distress signals, alien civilizations, rebel ships, space pirates, asteroid fields, nebulas, solar flares, and other potentially beneficial or deadly encounters. Improving your chances are the various systems on board: shields, engines, weapons (both missiles and lasers), sensors, oxygen suppliers, drones and other ship functions. You must manage the limited power of your ship's reactor, and designate crew members to fix and man the various stations throughout the ship. Your ship can be upgraded by collecting scrap from victorious battles, or from successful completion of side-missions. Lose all hull strength, run out of fuel, or kill every crew member, and the game is over. Such a description, however, only scratches the surface of FTL's mechanics, and a play through the tutorial is a good idea. 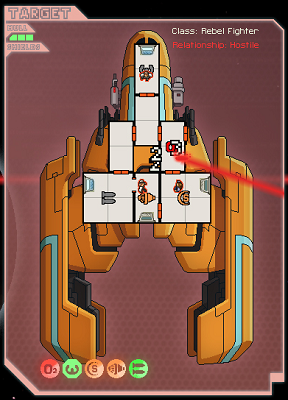 Analysis: FTL's gameplay has a number of competing influences. Obviously there's a lot of Star Trek in its presentation of a varied galaxy, filled with various species and groups competing for influence, with your ship just a small window into the wider universe. The emphasis on supply management and constant travel likewise gives it an Oregon Trail-by-way-of-The Cold Equations feel. But more than anything, a central conceit of a perpetually understaffed spacecraft, only one step ahead of deadly pursuers, a goal in mind, but taking whatever job you can get because bits are falling off your ship, the crew hasn't been paid, and you've got a powerful need to eat something this month? Yeah, FTL is pretty much the best Firefly game that was never made. Sure, there's no Whedon-style snappy banter or moral quandaries, but as you find yourself under attack by a rebel ship that outclasses you in nearly every way, the shields barely holding on, but the FTL drive finally manages to powers up for one last desperate jump... Well, the ship may be in tatters, but I don't care, I'm still free, cause, if only for another five minutes, they couldn't take the sky from me.

Functionally, FTL doesn't deviate much from its central premise of (with all due respect to Schlock Mercenary) traveling the galaxy, meeting fascinating lifeforms, and killing them. It is a game solely about confronting a hostile universe, from the confines of your tiny ship, for better or worse. Your opinion on the "better" or "worse" question will depend largely on your expectations, particularly when it comes to the games Rouge-like-like elements. Graphical simplicity keeps play streamlined, but Randomly generated worlds mean a new experience every time you play, but limits plot and characterization opportunities. Permanent death raises the stakes of every game and makes victory all the sweeter, but can punish strategic experimentation. You'll die a dozen deaths before coming close to delivering your first piece of intelligence, but that is standard for the genre. Really, what it comes down to is that FTL has an solid core, but could use a little more fluff. 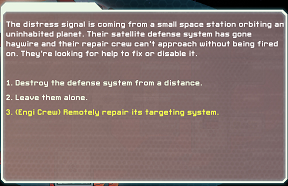 The various enemies you encounter have different ship designs and general attack strategies, but they often feel indistinguishable. So many of FTL's choices boil down to "fight" or "flight", which will inevitably get a little repetitive. Certainly, this is not a 4X game, and isn't trying to be, and, in the long run, the specific philosophy of the creature trying to blast you out of the sky is irrelevant. Still, one wishes there was a little less stat management, and a little more diplomacy. It may be too much to ask for a two-person team to come up with Star Control II level dialogue and alien personalities, but surely you should be able to talk your way out of a battle every now and then. Even James Tiberius Kirk famously noted that space battles were as much poker as chess, and it would be nice to be able to fool a few aliens with a corbomite maneuver of your own.

Keeping all the above in mind, it's worth mentioning that FTL: Faster Than Light is utterly addictive, and will keep sci-fi RTS fans playing until every ship is unlocked and every random event triggered. As one of the site's first major success stories, KickStarter could not have asked for a higher quality work to be its standard bearer, and all those who supported it should feel they've gotten their money's worth. And should you decide to spend a few of your hard earned imperial credits on it, so will you.

You can talk your way out of a few events - I've hit Zoltan pilgrims and Rebel negotiation text trees, and having a certain race or system on your ship can give you a blue option in some events.

Granted, but the trees are a very rare occurence, and the blue options mean that crew-members come off as a little indistinguishable from equipment.

An important part of the television shows which FTL finds its inspiration is that bluffing and philosophical debate is considered a major tactic, as capable of resolving conflict as the space battles. I invoked Star Control II specifically, since once of the things I found lacking was that there was nothing on the level of trying to convince/annoy the Iilwrath that their WE'RE ALWAYS EVIL philosophy doesn't make sense, or convincing Spiffo to join your side by convincing him you pose a larger threat than the Ur-Quan. I guess I just wanted a more fully realized game world.

At the very least, the game could use a post-battle QUIP/PONTIFICATE button. There's no way Han Solo, James T. Kirk, or Malcolm Reynolds would let the defeat of an alien slug ship occur without some sort of wry comment.

I'm really intrigued by this game after seeing it on steam the other day, but when I was reading your review, specifically the "a perpetually understaffed spacecraft, only one step ahead of deadly pursuers, a goal in mind..." stuff at no point did I think Firefly, everything just sounded like Battlestar Galactica and it sounds like that show might have had a large influence on the game but wasn't mentioned.

I'm a huge Firefly fan and would've loved a game of it but doesn't sound anything like what I'd have imagined one to be.

Red Dwarf theme song? yes. Yes. YES. That was the song that got me through the hell of early morning band practice by teaching myself to play it instead of falling asleep. Now I'm obligated to play this game regardless of its relevance to the song.

In a related story, I've totally renamed one of my in-game ships Starbug. I also attempted to recreate the scene from Gunmen of the Apocalypse where the Dwarf-crew manage to outfight the simulant ship by being almost suicidal;y aggressive. Sadly, in my case, it turned out to just be completely suicidal.