Galcon Fusion is the latest in the growing line of casual strategy games from Hassey Enterprises. Following Galcon Classic, the original desktop version of the series, and borrowing a ton of tricks from the iPhone incarnations Galcon and Galcon Labs, Fusion pits you against the rest of the galaxy as you fight for dominance. Featuring high-definition visuals, loads of interesting modes of play, and several fun bells and whistles, Galcon Fusion is a respectable successor in the Galcon line and a captivating casual Risk-like strategy game. 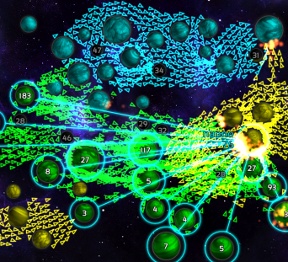 Your job is to take over the universe by spreading your ships from one planet to the next. Each planet has a population number on its face that slowly goes up over time. If you want to take over a world, you have to reduce that number to zero by sending wave after wave of your own ships. To attack, simply click on one of your planets (or drag to select multiple planets), roll the mouse wheel to select what percentage of the population you'll send out, then click the target. Your ships immediately go forth and smash into your foe's world, reducing its population by one for every one ship. Maniacal laugher shall ensue.

Not content to confine gameplay to "conquer 'em all", Galcon Fusion features a number of modes, some of which are quite interesting. Vacuum, for example, drops you in an enemy-free universe with a ticking timer, challenging you to occupy every world before the clock runs out. Assassin sets one of the players as "it" and the game is won by whoever destroys that player. Crash makes it so in-flight ships can collide, adding a whole new level of strategy to the game. To top it off, you'll find ten selectable levels of difficulty in Galcon Fusion, enough to give you as much challenge as you desire.

But here's the real reason you'll pick up Galcon Fusion: online multiplayer. Now you can take on your friends as well as complete strangers in chat-enabled matches right from the game's main menu. Not all modes are available in multiplayer, but it's great having flesh and blood opponents who can think and react to your strategies like only humans can do. Meaning, you know, betrayal and sneakery and all that fun stuff. 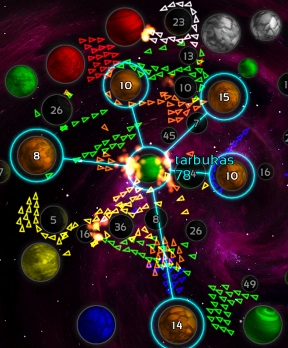 Analysis: Galcon Fusion is one of those games you'll play over and over again. It's as casual as a strategy game can get, reducing everything to a simple game of numbers. Despite its simplicity, you won't find a shortage of challenge or variety, just a nigh infinite amount of quick galaxy-conquering games to play.

Brevity could also be Galcon Fusion's main drawback, as the short, 90 second nature of each round lends itself better to a browser or mobile game. The program itself is lightweight, though, so it's not like you have to fire up dual video cards and overclock your processor to get things done. A quick round or two is never a hassle, and if you're a casual gamer, you don't want to sit in front of the game for hours on end anyway.

Galcon Fusion carries with it a delicious little secret: Retro mode. Are fancy visuals too much for your 1980s-accustomed eyes? Hit [F10] during a single player game to toggle the keyboard-controlled ASCII-only retro mode. Now you're playing a real "color computer video game".

Galcon Fusion keeps things casual and makes a surprisingly successful leap from the iPhone back to the desktop computer.

Fills me with a sense of disgust. Game design at its most banally shallow, it's either agonisingly easy or sharply and suddenly unfair. The art of game design is in making a challenge fun - this game achieves neither. Either the challenge or the fun are missing.

Difficulties 1-5 = the enemy is numerically handicapped resulting in certain victory in time.

Difficulties 6+ = the enemy is numerically superior and produces units invisibly at faster rates than you can, meaning you either nip the bud in the first ten seconds or die a slow and painful but quite inevitable death.

No room for last minutes miracles, no heroic battles. It is decided the moment the numerical balance is broken.

Perhaps this is simply a limitation in the demo.. perhaps I'm grasping for straws trying to understand why this game exists.

I've not been this.. irritated, with a casual game's design in memory.

Tried the demo. Felt a lot, a LOT, like games that already exist. Maybe because it already exists? This is a real cheap cash in on a free version of a flash game. Oh gee, what was that called? Phage wars.

Besides the obvious clone, the game is not incredibly innovative as it comes right down to numbers. The ability to come back after a long battle having lost a ton of "ships" (triangle things) is not something you come back on. No micro here, the entire game is based on macro.

I've tried a fairly middle of the road difficulty (I believe commander difficulty; the white flag one)for the AI and he was dumb enough to sacrifice triangle thingies on a planet that was obviously not WORTH anything (It was a small planet which has small return rate).

The AI does not prioritize high return planets. (Unless you want to give yourself a handicap by ramping up the difficulty and see how well that AI "improves". Somehow, I think by a lot.)

[The original Galcon was developed in 2006 and therefore existed before Phage Wars. Perhaps do some research before making such statements? -Jay]

Honestly, the review should probably be amended to point out its resemblances to Phage Wars and Eufloria. Souped up graphics to be sure- but that doesn't make it a new game. :-/

Honestly, you people should probably do your homework before commenting.

i dont particullaly like these kinds of games, (ie. sending a number of whatever to capture a whatever, you know what i mean)
and for me to like it and play it more than just once, it needs something extra, and even though this has a lot of different features, it just still feels very repetative.

Eww, I don't like this kind of game. "Win-more" at its most dull: once you're winning, you win more; once you're losing, you lose more. Can't see why this game is so popular.

The article is completely correct: Galcon is at its best in PVP with multiple opponents.
1v1 Boring? Yes. There is little strategy when all you need is numerical superiority.
However, add a few more players/CPUs and the game becomes a lot more interesting.

I think Galcon is a far purer strategy game than most other on the market. In anything else the core gameplay mechanics are masked or hidden behind [random stat name]. Here, there are numbers with no guesswork involved.

P.S. Oh, and Phage Wars? It's an inferior blatant rip-off of Galcon...