Horticulture enthusiasts, rejoice! Gardenscapes is back, and it actually takes place in a garden again! And for those who find this amount of mirth somewhat disconcerting, Gardenscapes 2 by Playrix Entertainment is an excellent hybrid hidden-object time-management game in which you help your long-serving butler, Austin, restore his parents' decrepit garden by selling off a bunch of junk from their house.

The first two games in the series were located in and around your own mansion, but now Austin and you take a trip to his old home, which is in a state of disrepair. You are greeted by Austin's amicable parents who instantly make you feel at home, which is just as well, as you'll spend the rest of the game rummaging through their belongings. Since you happen to have a seasoned green thumb, you will repay their hospitality by fixing up their garden, and you'll raise the money by organising a whole heap of yard sales. While you're busy with that, Austin will go down memory lane, digging up objects from his childhood and reminiscing about the past. Your doggy Rover is there, too (of course it's Rover! What do you mean, you named him something else?), giving the game a pleasant sense of continuity. 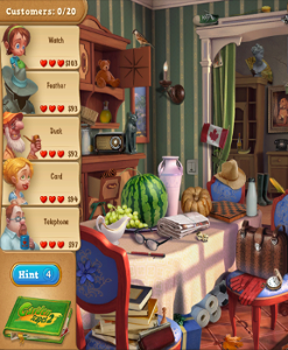 So, after getting settled in, you embark on your mission. Yard sales are hidden-object scenes set in various rooms of the house, and upgrading the garden unlocks more rooms. Townsfolk appear on the left side of the screen, five at a time, with a description of what they want to buy. They start out with three hearts, and lose them gradually, depending on how much time you take to deliver their item(s). There are four types of hints to help you find what you need, but it's best not to waste question marks, as you get a bonus for each unused one. Every scene contains a few hidden coins which add a bit of money to your funds. Between yard sales, the game goes back to the garden where you can buy upgrades. There is an impressive array of options, from fences to statues to birdhouses, and each of these comes in three models, so you can choose your favourites and make the garden more personal. Some additions will trigger little events involving Austin, who is put in the centre of the storyline. 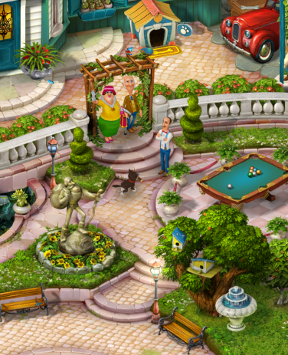 Analysis: Gardenscapes 2 is a rare gem among casual games due to its unique atmosphere. It's dfficult to find a game that will make you more relaxed and happy. It's chock-full of sunshine, birdsong and a warm fuzzy feeling of familiarity. But what really sets it (and the whole series) apart is the fact that the characters talk to you personally. Austin will often lift his head to look at you, or wave at you when there is a letter to be read. This is not a major feature, but it truly draws you into the game and makes you a part of it. The main story is straightforward, but there are lots of little events that spice up the time between hidden-object scenes, and Austin often comes up with remarks or comments that add to the feeling of realism. The graphics are detailed and adorable. The garden, especially in the later stages, looks lush and inviting, and it's a joy to watch Rover saunter through it. You can amuse yourself by clicking on different items in the garden and watching Austin's reaction. Another delightful detail is the animation of the upgrades. Each time you buy an item for the garden, it will materialise out of thin air, and it's thrilling to watch a swirl of leaves come together to form a bush.The rooms are well done, with sharp solid objects and enough colour and variety to make them pleasant to hunt in.

Another important feature of Gardenscapes 2 is its lifetime, which goes far beyond the few hours you'll need to finish the story. After you buy all the upgrades, you can continue playing and redecorate every part of the garden; this, of course, requires more money, and therefore, more yard sales. Also, there is that sly achievement for earning all the other achievements, and you can't just let it go, can you? There might be a few more surprises to keep you in the game, but that's up to you to discover. It even brings a few innovations into the series: there are specialised sales, where only five customers ask for a number of themed objects, as well as pre-level tasks given to you by Austin or his parents, where you'll have to combine items to achieve a goal, or clean up a room before a sale. Your efforts are rewarded with achievements which pop up in the upper right corner of the screen. There is also a picture album, documenting Austin's childhood and youth, which starts out empty and gets filled up as you find photos buried around the house.

Finally, the best thing about Gardenscapes 2 is the realisation that you don't need any incentives to play it again. It is so warm and friendly that it can be the game you turn to when you need something to cheer you up on a rainy day, and it will never fail you. So try the demo, wander into Austin's little world and stop to smell the roses.

How to get full lives (hassle-free and free-free) on the Gardenscapes app for iPhone.

This "trick" is free, done without requiring hacking apps or software, and without having to ask friends or use in-game currency. The trick was done with an iPhone 6s running iOS 9.3.2 on 9/2/2016.

*Its important to switch the date and time back (steps 4-5) to reset the clock so that you don't have to keep moving the clock further and further away from the current time. If you do not do this, the game thinks you ran out of lives 2.5 hours ahead (or however far out you set the time).

*Done on iPhone 6s with iOS 9.3.2 but may work with multiple devices and platforms.