Lines. Squares. Lines and squares. These are the tools you will be using in GooDMage's new puzzle game, Glow Path, available for your browser or Android device. The game is as minimalist as they come, featuring white backgrounds, simple designs, and puzzles that are quick to solve but immensely satisfying nonetheless. Simply click on the block you wish to slide in order to connect one glowing box to it s non-illuminated partner. You only have a limited number of clicks, usually only two or three, so plan things out beforehand. This is a game about perfection, not experimentation. 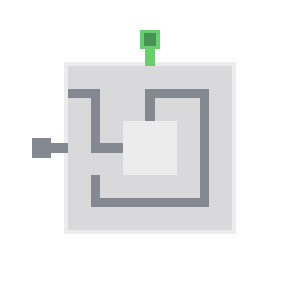 Like many games of its type, Glow Path is diverting but not exactly a thrill. Some truly excellent music spices things up a bit but for the most part it holds you only as much as you want to be held. This game is pretty firmly planted in casual territory. Not that that's a bad thing! Glow Path's quite a bit longer than some similar titles like Blue Box, however. One hundred levels await you, each of which can take you short seconds or long minutes to solve, a perfect wellspring of puzzling goodness you're welcome to dip back into whenever you've got a few minutes to kill. Later levels introduce new ideas, such as branching pathways leading to multiple endpoints that you have connect simultaneously in a few short clicks. Glow Path is fun and easy to learn, a perfect game for any casual puzzle fan.

Having the same music as Kerbal Space Program is rather distracting...

That's the downside of royalty-free music, I suppose.

Pretty fun, but monotonous. I can't handle the entire game in one sitting.

Got to level 11 and got bored. Buuut that's just me, I don't really like slide puzzles.

Agreed: nice game, but gets boring real soon. The puzzles don't seem to get harder - at least level #20 is about exactly as hardas level #10 - takes about the same amount of brainwork and time to solve.

Good to kill a minute or two though.

I'd like to somewhat review my earlier comment. While I stil lthink the game gets boring right up until the mid-30's of the levels, there are some really challenging levels after that.

Being given a max number of moves to do a level is SUPER unfriendly. Quit at level 5, just couldn't see it.

And way to have no practise levels either, just dropped straight in at the deep end. You don't want people playing this, do you?

Oh my goodness. It has the same music as one of the stages from Small Worlds (the game that won one of the CGDCs). The winter-wonderland-except-not-because-missiles one.

Having the later levels easier is rather strange, though, isn't it? Not bad. Nothing exceptional, but, hey. Not bad at all.

You need to make a bottle shape
solution:

52-58
https://www.youtube.com/watch?v=RezkI08LgzQ
They may upload more since it was only posted 3 days ago.

I am currently on 85, so I may be able to help if you post. That is if I have not finished the game and moved on.

Finished. Much more difficult and the game would likely be frustrating. I would say harder levels without the limitation of moves would be a nice addition.