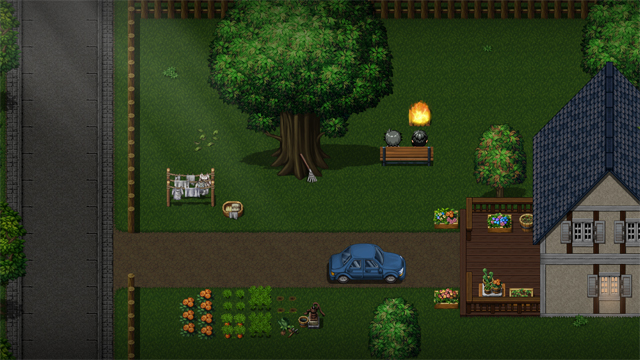 There is a saying that you can't appreciate the good without having some of the bad, and that sometimes you don't know what you have until it disappears for good. Gone Fireflies is a game about love, loss, loneliness, and maybe a bit of empathy mixed in. You begin as detective James Reed called out in the middle of the night to investigate an apparent suicide of a woman and the disappearance of her husband, Thomas May. You play as both men - the detective and the husband - as you try to untangle the story that runs deeper within them, in the process discovering the connection between.

The strength of Gone Fireflies is definitely its emotional depth, which cuts pretty deep as it shows firsthand the pain of losing some of those closest to you: your family. Through a series of carefully orchestrated flashbacks, Quiet Bay Studios illustrates how you and your wife lived and loved. She wanted a child. You warned her to be careful. She was so carefree and full of energy that she didn't listen to you at first, but ultimately recognized you were right without you ever having to tell her. The story suggests an unfortunate event that occurred at some point during the pregnancy, but you'll have to find out more about that yourself.

The game is accompanied by a rich and varied set of soundtracks that do well to keep the often-somber mood present. In addition, much of the story is told through the clever use of flashbacks to vivid memories of the detective (and others') past. Sometimes it's not clear at first which piece goes where, like a complicated jigsaw puzzle with similarly shaded pieces. But like that same puzzle, by the time you reach the end of the game, many of the pieces will have fallen into place. The story also changes in some aspects based on a few key choices at certain points in it. Much like in real life, there is a finite amount of time and resources, and many mutually exclusive options. Even as a detective, you can't investigate every corner, or cross-examine everyone with every single question on your mind.

One of the most intriguing aspects of Gone Fireflies is the pacing of the title. I can't quite recall any other games done in RPGMaker that have tried to execute the drawn-out, emotional side of a story. To some extent it is a success in that by the end, the emotional impact on the characters is very well communicated and illustrated to the player, if they get that far. On the other hand, the way it is conducted, in conjunction with the slightly clunky style of text presentation, seems keen to test the patience of some players. I do applaud Quiet Bay Studio for their efforts, though, as it does take some courage to try out something new - and I for one enjoy seeing experimental themes play out. They certainly have stretched the RPGMaker genre, if you will, beyond what I might have imagined possible beforehand.