If you're a more hands-off sort of space commander, then you probably already about Positech's Gratuitous Space Battles. Set up ship designs and place them into formation before launching them into combat, all on a massively gratuitous scale! Your strategy determines the outcome of the battle rather than your reflexes, a perfect option for those of us who have been reduced to still-living brains floating in jars. 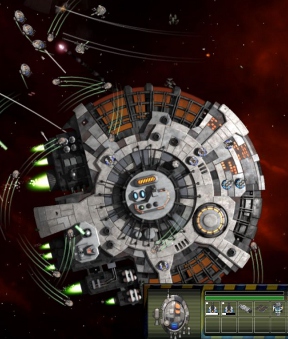 A new bit of downloadable content has recently been released for the core game: Gratuitous Space Battles: The Outcasts. It adds a new race, the cybernetically-enhanced Vla-hurk 2.0 who also happen to be religious exiles. The Outcasts come with their own flavor of "sauceresque" ship in ten varieties, including new modules such as sniper lasers, tractor beams and the race's signature module the Decoy Projector. There are also a couple of new missions that pit you against the Outcasts should you rather do that instead of playing as them yourself.

If you're a Gratuitous Space Battles nut then chances are you've got the various expansions already and are likely to do the same with this one. If you haven't tried the game yet, The Outcasts is a good starter DLC once you've exhausted the base content; the Vla-hurk 2.0's unique modules and ship aesthetics add a bit more unique flavor.