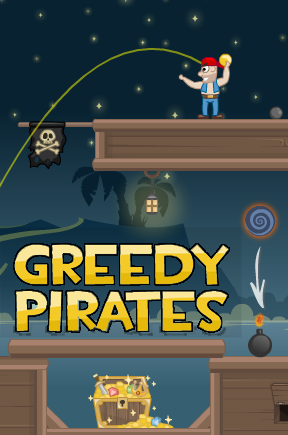 Avast! Did ye awake all the totems in Forsh Vladislov and Krasnova Alina's previous projectile-tossing physics ? Do you think that getting the timing down in tossing an object is less frustrating if the object is a piece of eight? Are you the fastest cursor clicker on the Spanish Main? Well Greedy Pirates is your chance to prove it. Along the way, there are such piratical mainstays as other pirates, bombs, planks, and teleportation devices. All the best pirate movies have teleportation devices.

The game essentially takes the format of the last game and smooths out some of the wrinkles, making Greedy Pirates a much less frustrating experience. You're still moving your mouse around to aim and clicking to fire an object around a level at a target, and the game still has the two-tier system of a time limit for a gold star with no other limits to amount of ammunition or time to complete a level, but the gold star timing is more realistic now. The end result is that if you like this sort of thing, this is the sort of thing you'll like even more. Especially if a bottle of rum is handy.

'Twas an okay game. I'm not a big fan of these graphics and these puzzles bore me out so quickly. The phyiscs were pretty well done but the controls lacked range; the cursor would get stuck whenever my mouse drifted towards the edges of the game. Character graphics needs some work, as their throwing motion stays at the level of elementary basic flash animation.

Entertaining to play while drunk or high, but boring for a sober person. Though if you're a big fan of pirates throwing round gold things at chests to close them, go ahead and be my guest.

Why's the Team Fortress 2 typeface been used in the picture? .__.