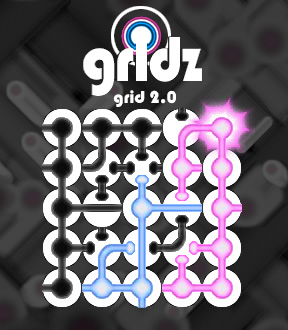 Chris and Jeremiah, the talented guys behind Atomic Cicada, are back with a follow-up to Grid, the puzzler that first launched them onto the casual gaming radar. Gridz features 40 levels of the glyph-turning, energy-channeling goodness you've come to expect from the original, without falling into the classic Hollywood bungle of rehashery.

The basic premise of the original remains: you need to turn a jumbled mess of pipe segments into a complete closed system, flowing with energy. Clicking a circular glyph will rotate it, but only if it's connected to an energy source, a condition that sets the games apart from the plethora of related pipe-style games. Where Gridz diverges from the original is in the introduction of two colors of energy — a glyph can hold either color, but the two energies must never be combined, lest an apocalyptically bad movie be summoned from the bowels of Some Picture Studios. We don't want that to happen again, right?

With the dual colors comes new glyphs designed to channel multiple streams without having them ever cross. These glyphs can be turned even if some channels are not powered, as long as there is energy flowing through at least one part. Neat!

Analysis: Often, sequels to puzzle games turn out to be nothing more than new level sets with a graphical face-lift. Sometimes this is a good thing — messing with a successful formula rarely yields positive results. When I first heard about Gridz, I knew such a strategy would not find much success. Not to take anything away from the original, but you could tell by the end of 40 levels that the base mechanic had run its course in terms of level design.

Sure enough, after a brief tutorial, the game introduced the pink and blue streams and multi-channeled glyphs, setting the stage for a gameplay experience that builds off the original while becoming its own entity altogether. It's a subtle, yet undeniable shift: where the original sometimes felt like trying to clean up after an octopus mosh pit, Gridz has a distinct puzzle air about it. There's still a fair amount of fiddling around, but the new elements provide more points of attack into the tangled mess of pipe.

The guidance offered by these new elements serves to make the game accessible to a wider audience by reducing the potential for frustration. Now, if you get stuck working on one stream you can simply switch to the other one for a while. Also, though the multi-channeled glyphs seem imposing at first, they're really one of your best tools, since they allow you to change the flow of the streams without much risk of cutting yourself off. Oh, and that face-lift I mentioned earlier? It's another welcome ally in the fight against frustration: it's a lot easier to tell which way you're turning a glyph, and that dizzying churn of a background has been replaced by a microbial Coruscant.

The scoring system remains the same as the original (-1 point per move and -2 per undo) with the exception of a 5 point penalty for restarting the level. One could argue about the necessity of this new penalty, but I'm more surprised they even kept the scoring system at all. Playing towards the objective of a high score takes away from the flowing, exploratory style that suits Grid so well and replaces it with extensive forethought and mental gymnastics. Thus, it's doubtful that many actually pay attention to the score anyway, instead playing toward that shining moment of accomplishment when the grid is complete and elegantly self-contained. Unfortunately, Gridz doesn't give you much time to sit back and admire your handiwork, which is disappointing, but ultimately easily excused.

So if you liked anything at all about the first Grid, give the sequel a try! It successfully merges the qualities that made the original a success with just enough fresh ideas to satisfy old fans while attracting new ones.

Had I known to wait for this sequel, I would have burst from the tension. As it is, I'm bursting with glee. Amazing game.

Great game :)
If I was younger, I'd pick it up more quickly, but as it is I keep confusing the clockwise and counterclockwise turning thing. So happy there's an undo button.

Hm. I was having fun but then I navigated away and it forgot my progress. Oh well; maybe I'll want to come back and play it again in a few weeks.

The new ideas are great, but I like the graphic of prequel more than this.
Anyway, I know I'll need to spend lots of time.

I've just received an update to the game and it should now save your progress.

Much better. Thanks, Jay!

Yeah, that non-saving made me put it down. Thanks for the update!

Looks like the level I'd lost my progress on was the last. Now I've beaten it -- with saving, it's a pretty fair length and fun straight through.

What is with this new batch of games that won't let me mute the game?

Is it just me, or does it undo a random number of steps when you hit the space bar? It seems to do anywhere from 2 to 8 - which breaks your train of thought somewhat and uses a lot of moves.

Aaron, there is a mute button on the lower right of the first screen -- hit it before you hit "Play" or "Select Level."

I got Level 40 95 percent complete, then realized my careless turning of a piece in the early stages had closed off the remaining 8 or 9 pieces so that I couldn't reach them. A.R.G.H.

This game is simple, but a lot of fun. It feels like playing chess -- you have to think several moves ahead. Or in my case above, about 350 moves ahead.

Lovely game!
Wish I could pass level 32!
Any tips somebody?

this game has made me hate my life ive been playing for about fourteen straight hours now... why cant i understand it.. i am on level 40 finally but cant figure it out.

I've been on lvl 40 for a about an hour or so, I've almost got it, sept for like two that are turned the wrong way... super hard! when and if I get it, I'll try to pust a link to the screen shot.

These months later I still come back to play it, even though there aren't any new levels here. I think that means the developers did a good job.

I love this type of game. My absolute favorite remains Colourshift from 2009.