You have to really hate someone to stab them to death, and then follow that up by making them explode too. So when her husband Hugo is brutally murdered in just that fashion, Gabriela Sanchez calls on you to solve the crime. You arrive at the stately house with your plucky assistant Jimmy Olsen Aidan in tow, determined to get to the bottom of things before dinner, but with a town full of secrets, puzzles, and suspects, this probably isn't going to be an open-and-shut case. Grim Facade: Cost of Jealousy is the latest hidden-object adventure from ERS Game Studios, filled with mystery, murder, mayhem, and the best line ever to be delivered in a game with straight-faced sincerity. "This is an inappropriate place for a koala." 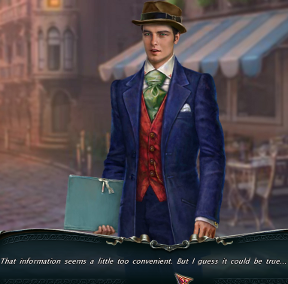 Click around to gather clues, useful items, and solve puzzles. The game offers a variety of hidden-object scenes from the familiar list-based designs, to hunting by silhouette, isolated item puzzles, and more. Being a detective, you'll keep track of all the evidence you find against the suspects you encounter in your journal, and believe me when I say it seems like everyone has a motive. As you might expect, it even seems like everyone's out to get you, too. Toppling statues, getting shot at, pacifying swarms of angry bees... fortunately, these are all things a detective is required to be good at, and you've got it covered. Even, it seems, charming animals into helping you, since dearly-departed Hugo's plucky fennec fox keeps showing up when you least expect it to show you the way. Which is approximately 100% more than what your assistant ever does. Thank you, Aidan, as an honest-to-goodness psychic detective I sure am glad I have you here to tell me that the thing I just saw happened. Super helpful. What am I paying you again? 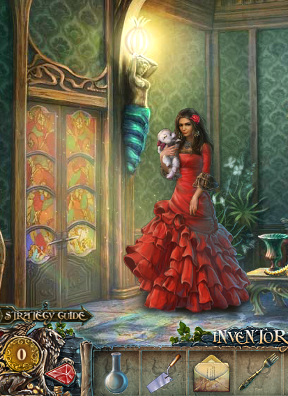 Analysis: The Grim Facade series can always be counted on to deliver some of the best satisfyingly elaborate mysteries around, full of twists, turns, and double-crosses, and Cost of Jealousy is definitely all about drama. Everyone's a potential killer, and the animated cutscenes and plot-twists fly thick and fast throughout. Chances are you'll be sick of flamenco music before you're more than halfway through, but it's definitely a gorgeous game (if a little washed out colour wise) that is great to explore. It's even sort of unintentionally hilarious as it turns you into the worst detective ever, using evidence important to the case to wipe up some dust and then tossing it away. Just pretend you're role playing as Mr Bean.

While there's nothing to the gameplay you won't have seen before if you've played nearly any other hidden-object adventure title, Grim Facade: Cost of Jealousy delivers another high-quality mystery packed with all the polish and style you've come to expect. Seasoned players may find it a bit too easy even on harder difficulty settings, with objects frequently found right beside the puzzle you need them to solve. With its evenly spaced hidden-object scenes, however, deliciously over-dramatic plot, and repeated attempts on your life, it makes for a well-balanced evening's entertainment... if not a particularly lengthy one at around three to four hours for a playthrough. Give the demo a try and settle in for murder.