A ghost, a wolf, a dark and isolated castle, and possibly even a werewolf? Looks like you've got your hands full in the latest hidden object adventure hybrid from Elephant Games, Grim Tales: The Legacy. A sequel to Grim Tales: The Bride, the story and setting are connected between the two games, only this time around, you're stalking through a castle while a peculiar wolf hunts you from the shadows. 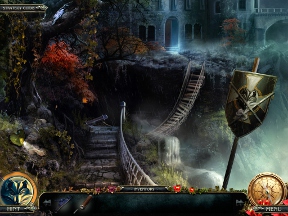 You're off to your long-lost sister's son's christening, which naturally takes place in a remote castle in the middle of a dark and stormy night. You get into a little accident just outside of the residence, but you manage to pick your way indoors all the same. Only... something's not quite right. Namely, a giant wolf that destroys the bridge leading to the manor's entrance! To top it off, a ghost haunts the premises, the Gray family was apparently trying to hide a great secret, and you swear there's a werewolf stomping around, too. Time to do some investigating as you worm your way into the castle.

A mouse-driven game to the core, Grim Tales: The Legacy is structured in a similar manner to the previous Grim Tales game and shares quite a bit with other hidden object adventures on the market. One notable difference is the manner in which puzzles are spread out across a number of screens. Instead of giving you a small array of zones to explore, each containing a few items you'll need to solve puzzles blocking your progress, you have many more scenes to check out with twice as many puzzles to work through. Often, you'll need to leave interesting things behind until you get the item you need much further down the road, adding a bit of difficulty not present in other casual adventure games since you have to pay more attention and actually recall details down the road.

Mini-games are strewn about and stick to the main core of tile-swapping, broken picture arranging fare, and the hidden object scenes appear from time to time to give you a few extra items to horde in your inventory. You can also choose between three modes of play, allowing you to customize the amount of help you'll get in the form of fast-recharging hint/skip timers and "sparklies" that show you areas of interest. 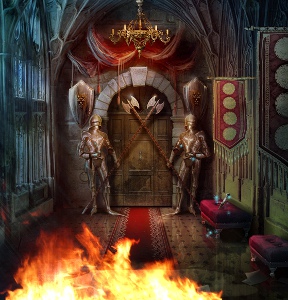 Analysis: Grim Tales: The Legacy sticks a little closer to the market-established hidden object adventure hybrid formula than its predecessor, though the gameplay doesn't really suffer for the step back in originality. The plot takes its time revealing any details of substance, and when it does, you might struggle to piece facts together. The holes in the story are small enough that you can fill them in with your imagination, just as long as you keep it to creepy, wolf-and-ghost-related things (or clowns).

What Grim Tales: The Legacy gets right are the visuals, the quick-travel map, a longer than average length, and the hint system, which is surprisingly smart and always directs you to where you need to go. It favors puzzles and mood over story, which could be a pro or a con depending on your preferences, but apart from a few slight pauses when initiating an animated scene, everything plays out smooth and snappy, just the way it should be.

Even though the hidden object scenes are scarce, they're the weakest part of the game. The spooky-meets-hauntey atmosphere demands equally spooky items, not USB flash drives, hot dogs, toy police cars, and batteries. It's jarring to see oddities such as this littering a dark mansion where wolves stalk you from the shadows.

Another strong entry from Elephant Games, a studio with the knowhow and experience to pull off a satisfying hidden object adventure game. Despite a few storypoint omissions and a reliance upon well-used tropes, Grim Tales: The Legacy is a great ride from beginning to end!

Grim Tales: The Legacy Walkthrough
General Information and Chapters 1 through 3

Chapter 1: Arrival at the Castle

Room Under Road and Lighthouse Entrance

Stairs Landing and Room Behind Window

Fountain and Inside Attic

Congratulations! You have saved and reunited the Gray family, and completed the basic Grim Tales: The Legacy game.

I haven't tried the download version, but I gave the flash demo a try. It is awful.

There were a fair number of glitches, returning to the menu wipes out any progress, and it occasionally took several tries to click on certain areas. Given that it is a demo, perhaps that is to be expected?

I encountered several glitches as well. Had to restart once.
I used the hint button continuously as I had no desire to find out why object A worked while object B didn't (even though A and B were essentially the same thing.) Quality was beyond anything I've ever seen. Considering that a demo should be the incentive to buy the game, I would't spend a penny on this.

The Flash version, although named the same, isn't a demo of the download version. For that demo you can download free and play for an hour.

Rarely have I seen a free Flash version come close to the quality of the premium game it's promoting.

I'm trying to get a hold of John to comment on the difference between the Flash version and the actual download version. I'll make sure he does that in the future for all games where there's a free Flash version as well.

The Flash version is a very poor representation of the production values of the downloadable demo. Really, the only thing you should take from the browser release is the basic gameplay structure, not the choppy, stuttering thing that eventually loads on your screen. :-)

The downloadable demo is of much higher quality than the Flash version.

Gameplay is horrible and also completely artificial. Why magic my machete away when I could've used it to cut the rope or the hook which I could've used to get the remote? Doesn't make sense.

Presumably there is also one specific thing that I must locate to throw at the crow. A stone or one of the roots that I cut off with the machete not good enough? And why can't I use the crowbar on the French windows instead of having find a drill? I gave up on it at that point.

Just like music, what sounds lovely to some is ear torture to others. I have given up making sense of the "rules of objects" in most games; escape games are fickle that way, too.

Anyhow, count me as someone who enjoyed the Flash version... and I guess that means it's a good game since most HOG/adventures are unimpressive to me. But the atmosphere here was nicely done and there weren't too many hidden object scenes to take away from that. It drew me right in, and, well, actually scared me!

Machette just disappears every time. I'm guessing I need it for the jack. One of the puzzle pieces was missing from the gate - unless I am supposed to find it elsewhere.

Sounds to me like you get what you pay for with the flash version. I played the beta of the D/L game and couldn't wait to continue with the final release.

I haven't played the flash version, but I can answer a couple questions from the real version.

You use the Crowbar to remove the painting from the wall in the hallway so you can play the mini game to open the gate that came down to trap the wolf.

You aren't trying to destroy the French Doors, just open them.

The Machete is only used to get the Jack for use on the Footbridge.

You need to pick up the Awl and Cloth from the sign next to the gate by the moat.

Use the cloth to clean the car headlights so you can see into the crack in the road. Use the Awl to pick out the Frog Key for the gate.

@Jazz thanks - I had those bits - but machette just disappears when I pick it up, it never gets to my inventory

yaddab -
In the D/L version you get the Machete as the final item in the Hidden Object Scene by the Fallen Tree.

I am playing this game but am stuck and cant go any further i cant find Louisa,s bedroom to find something behind the painting.can you help me please,
Thank you
saggi

If you have been there before, use the compass/map in the lower right corner to find your way back.

Put your cursor over any place without a question mark to see it's name and task required.

Click on the compass/map in the lower right corner, then click on the Yard and you will go there.

It won't let me put the battery in the generator. I see the blue shimmery part but it doesn't let me examine it.

Did you charge the battery?

Grim Tales: The Legacy Walkthrough
General Information and Chapters 1 through 3

Chapter 1: Arrival at the Castle

Room Under Road and Lighthouse Entrance

Stairs Landing and Room Behind Window

Fountain and Inside Attic

Congratulations! You have saved and reunited the Gray family, and completed the basic Grim Tales: The Legacy game.

when i click hint it says there's a wind generator at the castle entrance attach the charged battery.it wont attached i dont undrestand please tell me what should i do?

There is a screenshot of the sequence under Workshop and Castle Door in Chapter 5 of the Walkthrough just above your comment. Hope it helps.

I need some help with the downloaded Grim Legacy game. I am in the castle, have the screwdriver, and know I have to remove the name plate. But, no matter where on the painting or name plate I try to use the screwdriver, it doesn't work. It's making me crazy! Can anyone help? Thanks!

There is a screenshot in the walkthrough above the comments. See Fireplace and Cabinet in Chapter 1.

well i like these kind of games but i'm furious with this one cause i have reached to the latest level but it is stucked because of a problem that the program must have.to be more spesific i'm in the point where i have to connect the battery with the generator to clear the fog but whenever i try to enlarger the image it doesn't open to have the job done...the cursor which is usually an arrow when you're discovering a task and you have the cursor on it should turn into a small magnifying glass,but as you understood that doesn't happening to me:(