Grow Nano is another fantastic release from On at Eyezmaze, creator of the unforgettable Grow series of Flash games. 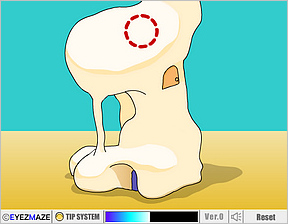 Each installment uses a common theme of placing objects in a certain order to allow a sequence of events to play out. Grow Nano tweaks this idea and introduces timed gameplay. Instead of moving and placing items, all you have to do is click on certain hotspots as quickly as you can. It's a lot more difficult than it may sound, but strangely enough, almost as rewarding.

This is an early version of Grow Nano and On says an update is coming soon, so expect a few tweaks and improvements in the days to come. Many people have problems with the play area being too tall for their monitor to display at once. To remedy this, just scroll the first hotspot to the bottom of your screen before you start playing. This maximizes the space and should keep everything in view.

Grow Nano doesn't have the depth of many other Grow games, but it has the same charm, style and simple fun we've come to love.

Thanks Alex for letting us know about this release!

My goodness you have to click fast! I can only get 16-17 clicks in before time runs out, and I still haven't beat it!

Fun game It only took 5 min to beat it. I wish something would happen once you finish it.

The game just stops and you hear a "Yeay" from the crowd.
Oh well still better than working all afternoon.

wow, that was easier than I expected from a Grow game, still took me three tries, but it is basically just a memory game and I agree with Chris J that it would be nice if something should happen when you beat it.

Well that was fun for 25 seconds.

Argghh!
I can only get to the tap then the time runs out!
Good Game but you loose intrest very quickley.
Goodluck Jay, keep it up.

Very nice for a game of its length.

easiest.game.ever. beat it first try, that was the easiest game i have ever played, ANYWHERE

Very, very difficult for one with touchpad.

I dont think I'll ever be able to beat it. D:

Press TAB, then you see a yellow square (in the flashgame), press Space to simulate a mousebutton.

start memorizing the locations, then you can just anticipate the next click

i was able to beat the game with 1/4 of the time left.

Wow... not much time there! The game was fun, but only because it shows us a little more of the whimsical world of ON's imagination. The idea was fun, it was well executed... but boy was that hard. (I am on a laptop...) I had to use the

cheat because I simply could not move fast enough. Even using that "cheat" I had to try about 4-5 times. Frustrating, and even more so for after I beat it, I didn't get to see the little people come out of the doors and turn on the tap and dane and say "Congrats" to me! Nothing! Well, fun game anyway. Good find Alex and nice review John.

I can never get past the tap!
Jay, what does it look like at the end?

I got just one past the tap...

Yay I got it with mouse clicking

I tried it with shift+enter, but I keep being slower then clicking with the mouse.

I have a touchpad, and I finished with a little time left. Took a couple tries though. The trick is to go super fast when

you hang poles, then the little things on the pole

Yeah, this was easy to beat but cute and fun nonetheless.

Heh, it's really easy with a tablet. Does that count as cheating?
Took me a few goes using the mouse though.
I can't wait to see where this goes. On's games always fill my brain with ideas.

Press F11. That way you get some more space.

Man, I'm not sure if it's my fault for having a small monitor, but I kept having to scroll up and down, which made it impossible.

the next version of this is up now!

On the reg version, where there is no time limit, where are the last two?

not a TRUEgrow game.
neither is the v.1 version of the nano either.

i finish it with 5 seconds to spare

Wow, after a while you kinda memorize it. But you need fast fingers... or a fast mouse!

that was so easy anyone could do it! lol

I don't know how, but I did it. Although it's not that hard. I prefer the other grow games, but this one is a challenge as well. Good job!!

Where is the ACTUAL walkthrough? I can't find it! HELP!