You are a paranormal investigator called to a town at your colleague's behest. While driving there, a strange woman appears in the middle of the road. You swerve, only to lose control and plummet over the edge of the railing. Sounds like the classic midnight movie set-up, right? So begins Vogat Interactive's latest adventure/hidden object hybrid, Guardians of Beyond: Witchville. 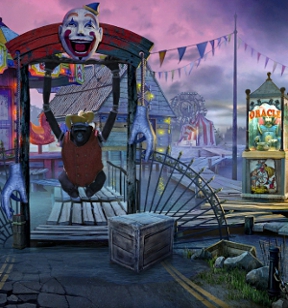 After miraculously surviving the flame-shrouded crash, you manage to make it into the quaint hamlet of Witchville, only to discover your partner has been turned into a ghost. In fact, the whole town's population are ghosts! The bigger problem? They don't even know what happened and they're just about the unspookiest bunch of ghosts you've ever met because, well, they're not actually dead. Of course, there must be a way to save everyone and you are exactly the person to do it.

Investigate Witchville—so called because of its annual harvest festival tradition—from top to bottom; search through hidden object scenes, gather clues, pick-up useful items and master a wide-variety of puzzles all while you peel back the layers on the townfolks' enigmatic pasts. Your initial impression is someone's angry that the town dropped a house on . . . er, that is, burned her ancestors at the stake, and so has exacted revenge. Ah, ghosts and revenge, like it's straight out of Shakespeare. Yet things are not as they seem and this is not the usual "witch curses town" story. First impressions, after all, are often wrong and the layers of story continue build in both detail and tension as the game progresses. 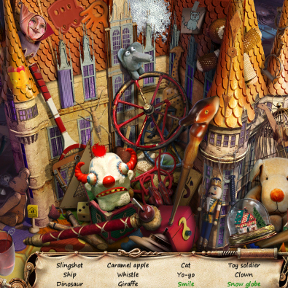 The mini-games in Guardians of Beyond: Witchville blend seamlessly with the storyline so that, the more you play, the more involved in the story you become. There are original takes on the standard puzzles as well as a few you may have not seen before. The hidden object scenes are very neatly-composed, never messy, and somewhat challenging because each object seems to belong in its setting, never standing out as an incongruity.

To keep it all sorted, important information, evidence and plot details are recorded in your journal. A convenient drop-down inventory bar stores collected objects and clues while a handy task list keeps you on the right track. Decide how hardcore you'd like to sleuth by selecting one of three modes of play: casual (for the laid-back, let's just be entertained types), advanced (avid fan of television mysteries, you're considered quite the detective), or expert (you're channeling Fox Mulder!) Whichever method you choose, if you can point and click, you're guaranteed to uncover some well-buried secrets and juicy juicy gossip. That's not fog you see—the air is thick with backstory! 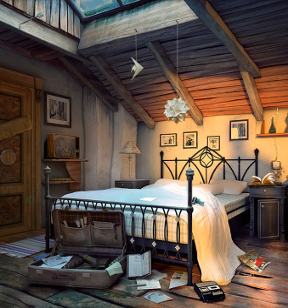 Vogat is great at drawing the player into the story yet it can be naggy with reminders that "time is running out!" each time a new discovery sends you along another path. The quest-starting message, "Hurry, you have only 6 hours left to save the town!" suggests that this will indeed be a six-hour game for those who treasure exploration and are loathe to use hints or skips. Experts out there will finish much faster while the average player will spend about 4½ to 5 hours on it. Often having a flexible agenda, Guardians of Beyond: Witchville allows players freedom in exploration which is a joy considering the scenery's abundance of aesthetic details. Needed clues are usually within a few rooms' distance, so you're never trekking too far for a required tool. Granted a few instances of accidentally popping up the inventory bar instead of backing out of an area, navigation is intuitively smooth, enhancing the exploratory experience.

If you've watched any number of late night movies on broadcast TV, you'll make a few summations long before our savvy blonde protagonist catches a clue. Yet that doesn't detract from Guardians of Beyond: Witchville's depth of story, superb character development and plentiful personality—all pulled together in a cheesy, soap-operaesque wrapper. Yes, it starts with a car crash. Yeah, the town is cursed and only you can save the day. But, given the chance to win you over, Guardians of Beyond: Witchville manages to stand out from the pack of hybrid adventures. Just as you think, "I've seen this kind of thing before," the action grabs hold and leads you in another direction. Someone once said, there are only seven original plot lines. If that's true, Guardians of Beyond: Witchville does a fine job scripting them all.