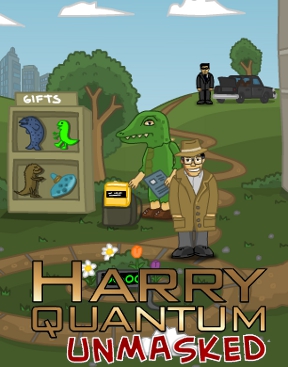 Harry Quantum; the P.I. name so nice they used it twice. They, of course, being TurboNUKE, the combined talents of robotJAM and longanimals, and in this case, we're glad theymade a repeat performance. Harry Quantum 2: Unmasked is the second part in the point-and-click adventure series starring everyone's favourite be-spectacled and be-fedora'd gumshoe, Harry Quantum himself. When the great masked wrestler Super Burro is fingered as the thief of some priceless Zaztec artifacts, he hires Harry to clear his name and figure out which dirty rat has been masquerading under his identity. Adventure? Mystery? PRO WRESTLING? Awwww, yeah, we're on the case!

As before, click around to investigate and interact. Harry will identify items in the speech box overhead as you mouse over them, and once you've picked up an object, you can plonk it in your inventory at the bottom of the screen for future use. Harry also apparently has magic eyes, because interactive zones in each area will glint periodically, which seems like a rather handy (though unfair) skill for an investigator to have. Just remember to search everything, and try everything, even if it seems weird. Especially if it seems weird. We are talking about a game with poo mints and Luchadores, after all.

Packed with puzzles, puns, and suspicious characters aplenty as you'd expect, Unmasked doesn't take itself too seriously, and the heavy emphasis on goofball humour, both subtle and blatant, makes it the perfect cheesy fare to relax with. Click detection sometimes feels a bit fussy, with item descriptions sometimes lagging to display, and some object use requires a bit of good ol' fashioned experimentation. It's a shame that the interface occasionally feels like it's fighting you or just spacing out, since otherwise Harry Quantum 2: Unmasked is a fun little title. You'll travel to quite a few locations, and excusing the occasional weird item use, you'll probably enjoy your sightseeing tour to track down Super Burro's imposter. It's a little longer than TV Go Home, and paired with robotJAM's bright artwork, it's definitely not noire. Give it a try, and remember; don't eat the guacamole.

One quick correction to the walkthrough: at the end, when the two Superburros are fighting...

it isn't always the right one that's the imposter. It may be whichever one you use the poster on second, or it may be random.

Nothing is happening when I click clock in plaza. I followed walkthrough exactly.

Sorry you're having trouble, but the walkthrough actually makes no mention of the clock ;) Instead, follow these instructions to set the time:

First, put the Mints inside the professor's lunch at the Museum. Next, go out to the Plaza and click the blue wires under the ground to start the puzzle. If you're having trouble locating the blue wires, they're in the dirt just below the path leading up to the doorway to the Museum.

Harry also apparently has magic eyes, because interactive zones in each area will glint periodically, which seems like a rather handy (though unfair) skill for an investigator to have.
Actually, if I'm not mistaken, they only glint whenever you click in a non-interactive region.

Good game, so Five mushrooms even so. If I could have taken off just half a mushroom for the missing sound effects, I would have.