The children! Won't somebody think of the children??... okay, admittedly you already have a lot on your plate, including chasing after your beloved when he's kidnapped by a real life Doctor Octopus and transported away to a nightmare realm that feeds on the fears of children. Haunted Halls: Fears from Childhood from ERS Game Studio is a hidden-object adventure game that picks up right where the original left off, and strives to set new heights in weirdness, surrealism, and tentacle shenanigans. 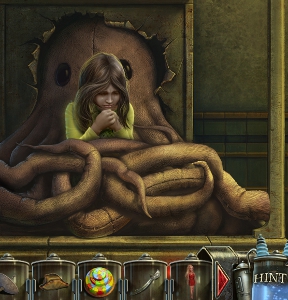 Yes, as you may have guessed from the title, the kids are not all right in this adventure, and the evil Doctor Tentaclepants has stolen away a batch of them and then locked them up in nightmares that feed off their fears. You'll journey into each child's mind and disperse their nightmares... by solving hidden-object scenes and witnessing an emotional break-up between Barbie and Ken, of course. At the beginning you'll be given two difficulty settings to choose from, but gameplay is the same regardless of which you choose. Click around to interact, gather items to solve puzzles and get past obstacles, and make use of the hint and skip buttons whenever you're stuck... which just might happen because you're not exactly exploring a world where things always make sense. You might have to instigate a genie battle, do something shocking to a tentacle, fix a tiki's teeth, or cheer up a despondent toy dolphin... hey, it's all in a day's work for you, right? All we can say is Tim better be worth the trouble... that guy best know how to make mad chocolate chip waffles. 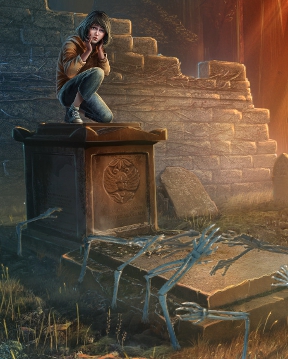 Analysis: With detailed animations and an uninhibited take on design, Fears from Childhood might be the most visually impressive game from ERS yet. The surreal setting really lets you explore some interesting places, with some gorgeous and bizarre design, though at the same time you might find the abstract logic in the realms you visit can somewhat inhibit figuring out logically where items should go. It's also not particularly scary, though this is admittedly only an issue if you're a foolhardy coward like myself and prefer your games to leave you blubbering incoherently under the covers. If what you want is a creative, weird hidden-object adventure that doesn't veer into particularly dark territory, Fears from Childhood might be for you.

If Fears From Childhood disappoints at all, in fact, it's the fact that the gameplay is both mildly repetitive and predictable. It's not uncommon to have to repeat a hidden-object scene twice in around five minutes, and most puzzle solving is fairly predictable... find the obvious missing piece somewhere nearby, kick puzzle's butt like a bawss, wash, rinse, repeat. Still, at over four hours for your average gamer's play time with plenty of odd surroundings and things to investigate, Haunted Halls: Fears from Childhood is a smashing follow-up to Green Hills Sanitarium and a great way to spend an evening. Still, if your doctor shows up with a roiling mass of slimy tentacles underneath his labcoat, you should probably ask to see a diploma... or at the very least have one or two plucky, wisecracking teenage superheroes on speed dial... just in case.