From movies to books to video games, the "creepy" seems all-pervasive. Put an individual or group in some deserted, out of the way place with lots of shadows and eerie sounds and you've got the recipe going strong! Luckily for you, assuming you're the type that likes creepy things, Specialbit Studio has quite the joyride for you! In the hidden object puzzle adventure game Haunted Hotel: Charles Dexter Ward, you get rewarded with the creepiest of creepy: a deserted hotel in a bayou out in good ol' Louisiana. I wouldn't stick around for any jambalaya if I were you. 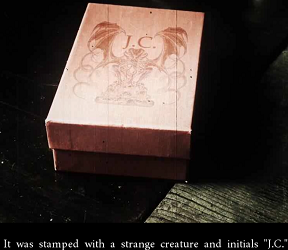 Your brother has been missing for seven days, and the cops don't seem very concerned, insisting that he simply "ran away". You return home one day to find a mysterious box with a rather imposing demonic figure on the lid accompanied by the initials J.C. What lovely thing rests inside? Just your brother's necklace that he never takes off. Obviously things have gone horribly wrong, and it's up to you to rescue your brother from a swamp infested wasteland. Good luck, and watch out for alligators!

Haunted Hotel is peppered with hidden object scenes as well as puzzles and mini-games. Your cursor is plenty helpful as it changes when you hover over specific areas, and depending on which of the two difficulty levels you chose, your hint button is either readily available or slowly recharging. As you mosey around the hotel property you'll discover notes and letters that will unravel the story of what has happened to your brother. The game plays through three days where you have no map to guide you, so be sure to pay close attention to your surroundings. 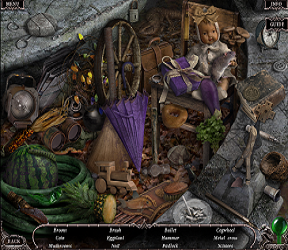 Analysis: The most phenomenally well done part of Haunted Hotel: Charles Dexter Ward is the cut scenes. When you come across a game with live actors, more often than not you get someone who doesn't know how to speak like a normal human or grossly exaggerates their character and it ruins the whole experience. Haunted Hotel avoids that folly and enchants with a seamless delivery, something you'll be quite thankful for once the game gets its hooks in you!

A point of frustration arises with the absence of a map. It's not that it's hard to remember which way to go, but in a hidden object game, there's always a good deal of backtracking. A visual reminder (or a blatant signal) that an area needs to be visited is always appreciated, so when it's not there, suddenly it's sorely missed. Haunted Hotel also does something unusual by using mini-games to open doors, a departure from the "find a bunch of keys for all the locks" philosophy of most casual adventure games.

Game plots are much like fashion and music: nothing is truly original anymore. From kidnapped family members to enchanted fairytale creatures, it's all been done at least a hundred times before in one form or another. Don't fret though because despite the repetition, Haunted Hotels delivers a well-developed game with intricate puzzles and dazzling graphics to make you forget, quite easily I might add, that you've probably done heard this story before.