Haunted Legends:
The Queen of Spades

Haunted Legends: The Queen of Spades is a hidden-object adventure game that puts you in the role of an inspector who receives a letter from a colleague. It seems a young police officer who was investigating some disappearances in a countryside manor has gone and disappeared himself, and your colleague is too intimidated to look himself, having put much stock in the superstitious rumours that surround the old place of demons and curses. Hah! What nonsense. Poppycock, even! You're not scared of anyth-OHMYGODWHATSTHAT oh no it's cool, it was just a leaf brushing against my ankle. Heh. Sorry. Where were we? Oh, right, nerves of steel. 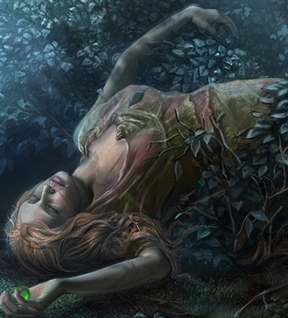 The site of all these strange happenings is the property of a woman who was once known locally as the Countess. Legend goes that hundreds of years ago she made a deal with the devil in return for a magic pack of cards, and built herself a massive fortune on them, rather than settle down and watch Judge Judy re-runs and play Keno on the weekends like every other respectable old lady. The Countess died alone, but the local villagers insist her home is still cursed... and once the bodies start piling up and someone starts following you, it gets harder to dismiss it as superstition. Will you solve the mystery, or will you too meet your fate at tiny murderous hands? Your investigation will take you all over the Countess' estate and the surrounding area, gathering items big and small to unravel the truth. Does the truth involve magical playing cards, or is there something even weirder going on?

Analysis: There have been a lot of horror- themed hidden-object adventure titles on the market lately, and while a month or so ago you might have been able to just pass this off as seasonal infatuation, it seems we just love anything the slightest bit dark and weird. Enter the Queen of Spades, which reminds me somewhat of a slightly less gory Elizabeth Bathory... with a gambling problem. While the music is probably going to sound a little familiar to anyone who's played any recent ERS Game Studio titles, the presentation here is still great. The developers have by now perfected the art of depicting shabby, once grand and elegant environments, and exploring the wonderfully creepy areas is a real treat for the eyes. 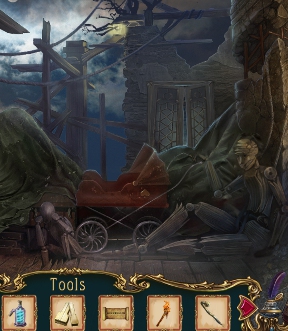 Surprisingly, and perhaps disappointingly, the game is fairly light on puzzles compared to other titles in the genre. Maybe that's a good thing when you consider how massive your inventory tends to get as you explore your surroundings... I didn't know Bags of Holding were standard issue for detectives. For the most part, item usage is pretty intuitive, and you'll usually be able to figure out which of the items you've picked up will best fit any situation. For the more abstract solutions, the sort of thing that you'd typically never figure out on your own, the game will usually tell you what items you need and it's a simple matter of tracking them all down. It's not particularly challenging, but it does make the game extremely accessible, and cuts out a lot of frustrating problem solving.

While the gameplay is fairly standard, Haunted Legends: The Queen of Spades is still a beautifully crafted, bizarre tale that will keep you busy for quite some time. It does a great job of keeping you interested and wanting to see how things play out, with a strange story that is anything but ordinary. While you might wish there was more of a challenge to it, if you're a fan of the mad and the macabre, you'll at least want to check of the demo. Just remember... when you stare into the gnome, the gnome also stares into you.

Haunted Legends: The Queen of Spades

Chapter 4: The Road to Town

Chapter 8: Off to the Summerhouse

Chapter 9: Return to the Mansion Interior

Chapter 11: Return to the Summerhouse

Chapter 15: Return to the Second Floor

The Queen of Spades

Congratulations, you have defeated SG for now!

Outside Town Library and Workshop

Haunted Legends: The Queen of Spades

Chapter 4: The Road to Town

Chapter 8: Off to the Summerhouse

Chapter 9: Return to the Mansion Interior

Chapter 11: Return to the Summerhouse

Chapter 15: Return to the Second Floor

The Queen of Spades

Congratulations, you have defeated SG for now!

Outside Town Library and Workshop

Ok, I'm stuck ... I need the torch and the spoiler doesn't mention where to find it, only how to use it. I have the fuel, I see the fire at the summer house, but no torch. Please let me know where you found it.

When you zoom into the window and take the card, you are suppose to put the fuel on the torch before you can collect the "unlit torch".

It shows all of it in the screenshot.

Thanks ... got it. Thought I got everything in that scene, details ... details!

I can't pick up the spokes to make the wheel for the carriage. I have the pitch and have applied it. The white gloved hand shows, as it does when you are supposed to pick up something, but the spoke won't be picked up. Am I missing something?

I can't find the adhesive for the boat.. it says to look in town .. but I can't find it.. so I'm stuck and can't fix the boat and can't move to the palace across the water.

You can't pick up the spokes, you need to drag them.

To find the pitch, check the screenshot in Chapter 4, Town Crossroads in the walkthrough above.

I've almost made it to the end but am missing the Ace of Diamonds. Does anyone know where it is? I've used the list of location of cards and haven't been able to find it. Thanks.

i look in the stableloft in the hidden object place for the lamp knob but it is not showing up where the walk through says is is. has anyone else had this problem?

cjc -
There was a problem with the first release of the game but there was an update that fixed it. Check with BFG.

I'm playing this game on my iPad.. Can anyone please tell me how to get the glass so I can make the fake mirror?

Conmac55 -
Check Chapter 14 of the walkthrough above the comments for the Fake Mirror Mini Game.

Chapter 5 stables loft hidden object puzzle - I didn't get a lamp knob, I got a butchers knife. I have reset game to try again and I cannot finish. Any suggestions?

Leanne -
What version of the game are you playing? Is it the D/L or a mobile version?

As I recall, there was originally a prob with the lamp knob but it was corrected in the D/L version with an update.

im at the very end of the game for the mobile version, and im trying to find the glass to make the fake mirror and i cant. Help please!

Sara -
It's in the Ballroom. See the 3rd comment above yours.

I can't get into the hallway from the salon. How do you do that?

Allison -
Make sure you have the latest version of the game. You need the lamp knob which was unavailable in the first release.

i cant get into the servants hallway. I click thelittle door but nothing happens. Im playing on my ipad could this have anything to do with if?

How do I navigate the boat in queen of Spades using my iPad2?

I don't know about on an iPad, but you can check Chapter 8 in the walkthrough above the comments for the River Mini Game to see if it helps.

How do you get into the room to the right of the stairs?

Since there are a lot of stairs in the game and more than one scene that fits your description, I'm going to suggest you check the walkthrough above the comments.

Thank you, I figured it out but I can't get to the staff room or the hallway of the salon

I received almost all cards still cant find the last card at each places help me :( bb

How do I get in the birds head in the manor at the bottom of the stair case?

Check Foyer and Staircase Corner of Chapter 9 of the walkthrough above the comments.

You get the red eye from the Thimble Mini Game on the Library Balcony.

You can also check out how to do that in the walkthrough under Library Balcony Thimble Mini Game.

There is a list of the locations for all the cards in the walkthrough above the comments.

I've just re-installed the game on my iphone, because I couldn't pick the lamb knob, but still doesn't work. Any ideas?

The Lamp Knob does not exist in the iPhone/iPad version of this game.

Instead, you should receive a Butcher Knife from the Stables Loft hidden object scene. The Butcher Knife is then used to open the jammed door to the left, just inside the mansion.

The walkthrough provided above the comments is for the PC version, and may have a few discrepancies from the version you are playing.

I can't find nine of spades. Does anyone know where it is?

There is a list of all the cards and their location in the walkthrough above the comments.

I already checked it out, but I play on my iphone and the scene, where the nine of spades should be, is not on the iphone version

In the iPhone version, you can find the 9 of Spades at the base of the left pillar in the Ballroom area.

I can't find the first hallway that is through the second door?
It's cheaper 4 the very beginning

Did you check the Location Map in the walkthrough above the comments?

I can not play the thimble game. I placed my two thimbles on the thing butnothing happens. There is no third thimble. I am stuck. The text only said there is a thimble missing but I can not find it. Help, help, help!!!!!!!

Where is the third thimble for the thimbles game? I placed my two thimbles but nothing happens. Help!!!,

I don't know what version of the game you are playing, but here is where you will find the thimbles.

The first thimble is located at the Loft Entrance, and the second you receive when you play the Library Balcony Hidden Object Scene. The third thimble is already in place for the mini game.

If this isn't the case, you should contact customer service wherever you bought the game.