All right, all right. I know undertakers are creepy and all, but there's no reason to go blaming them for every little unrelated thing that goes wrong, like a poor harvest, or that growth on your back, or... uh... hmm... well, okay, maybe zombies suddenly rising up to beset your sleepy coastal town could tangentially be related to a guy who spends all his time in a graveyard. Maybe. I guess the old saying is true. When there is no more room in H-E-Double-Hockeysticks, the dead will walk the hidden-object adventures. ERS Game Studio serves up a ghoulish good time with the next installment in their popular series, Haunted Legends: The Undertaker. 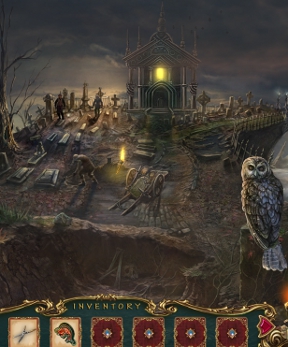 Well, as it happens, the town's zombie plague is only mostly the local undertaker's fault. When the world's most suspicious stranger comes and offers him an Amulet of Prosperity in return for a family heirloom, an "Ancient Mirror", he takes the amulet hoping to solve his family's financial problems. When he decides to stiff the stranger on actually delivering the mirror, however, the impish little fellow takes his revenge in a big way... apparently in the form of a curse that has the living dead wandering the streets day and night. (Although as far as zombies go, these are fairly well groomed and polite.) In an effort to keep her brains firmly inside their original container, the undertaker's wife calls you in to set things right rather than Leon S. Kennedy, who was presumably too busy practicing lame quips in front of a mirror. Unfortunately for you, detective, solving this mystery will be a little more complicated than going to the pub for a pint and waiting for this whole thing to blow over. You'll need to solve puzzles, gather clues and useful objects, and scour the town to get to the bottom of things, uncovering the truth behind a family heirloom and the corpses shuffling through the streets. 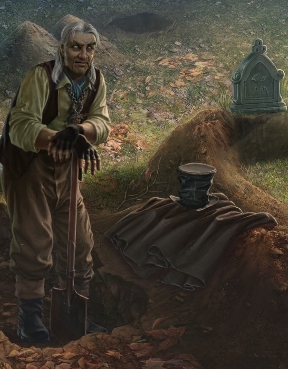 Analysis: Don't be afraid. Despite the shambling subject matter, The Undertaker is light on gore and grossness, but piles on the creepy and surreal. It's an absolutely gorgeous game that's heavy on atmosphere and design, and its bizarre storyline piles on so many twists and turns that it's easy to get wrapped up in it almost immediately. The animation and voice acting is surprisingly good, and you'll even get a few mild jump scares for your trouble. Nothing legitimately scary, however, despite some morbid scenes, and some out-of-place goofiness with a capering monkey throughout the game is rather eye-rollingly obnoxious after a while as it disrupts the tone whenever it happens. It's hardly a deal-breaker, though, and fans of the genre will love the game's heavier emphasis on adventure and puzzle-solving, with the hidden-object scenes for the most part spaced comfortably out so they don't grate even if they tend to repeat.

The only real downside is that the game is fairly easy, regardless of difficulty setting. The puzzles are relatively straight-forward, weird as they can be (Zuma?!), and despite needing to do some backtracking items are usually right where you need them, even if it seems a little like busywork from time to time. If you don't demand a challenge, however, Haunted Legends: The Undertaker is the sort of fantastically weird and not a little bit creepy adventure that makes for a perfect evening of gaming. Aside from the undeniable lure of finding out the purpose of something called a "Destiny Fish", the game is packed full of cool scenes, high production values, drama, adventuring, and zombies trying to eat you in a very passive-aggressive manner. There's even a monster shoe. Monster. Shoe. Need a strange but effortlessly entertaining hidden-object adventure? Haunted Legends: The Undertaker is your guy. Provided you don't mind your guy gnawing on your limbs once in a while.