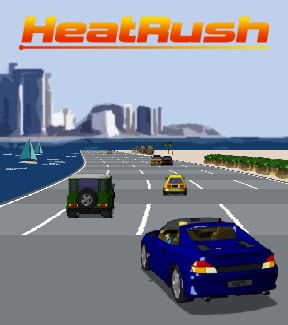 On your marks! A bead of sweat trickles down the side of your head, lingering at your temple before rolling unnoticed down your jaw. The sound of your car's engine purrs all around you, smooth, relaxed, emitting that sweet low tone of a machine tuned to perfection. Get set! You grip the clutch and test the accelerator, smiling as the car responds, its purrs rumbling up to the dangerous growl of a panther coiling to pounce. You're sitting on a storm, a hurricane waiting to be let loose. Go! The growl of the engine leaps into a high pitched roar as the tires paint the asphalt burnt black. There is the merest fraction of a second as the universe encompassed by the car battles between concepts of stillness and concepts of dynamics, and then, with a lurch, you're off, barreling down the road in Heat Rush, from developers Asute and Long Animals.

For many of you, Heat Rush will be familiar, as there's no doubt this is an Out Run/Rad Racer clone. To be thorough, the lineage for this type of racer can be traced back to Pole Position and has a varied and vast history up till the present versions of Need for Speed, Project Gotham Racing, Gran Turismo, etc. Like those games from past and present, Heat Rush puts your view behind the racing machine, where you essentially remain in the center of the screen while the scenery whips by. Here, all of the steering, accelerating, and braking is handily taken care of using the [arrow] or [WASD] keys and if you need a quick turbo boost, wait until the meter at the bottom of the screen starts flashing, then mash the [space] bar or [X] key.

Heat Rush is a clone, but to its credit, it's a fun clone, capturing much of what made Out Run (its closest relative in the racing game taxonomy) a quarter gobbler back in its day. Visuals are clean and impressive with static three dimensional images racing toward you fast enough to make you believe you feel the wind whipping around your ears. Controls are tight and responsive, but also account for drifting in hard turns. Unless you have titanium dipped nerves and fresh ice in your veins, you'll probably catch yourself leaning back and forth as your tires screech towards the outer edge of the pavement on the tougher curves. Thus, Heat Rush does a magnificent job translating the feel of speed and precarious cornering into a Flash racer.

To its discredit, Heat Rush gets a few things wrong. My largest complaint is the upgrade/achievement system which greatly limits your ability to customize your vehicle. Yes, I know, the older racing games didn't have customizable cars, but it's 2009 now, and the custom shop has become a racing staple. Here any upgrades you receive are directly tied to goal-based achievements. Can't get the achievement? Forget about the upgrade. Also, the bracket style course selection is a little annoying, as selecting one branch from the beginning precludes certain tracks later on.

From turbo starts to spectacular crashes, Heat Rush successfully captures the heart of racing games of the past. Strap yourself in, pull on the leather driving gloves, and get ready to go VROOM!!

This displeases me
'nuf said
I guess its pretty good

That was a very confusing comment, if I don't say so myself. But I just did say so.

Huh. I was on my way here to say the same thing. Is it irony day today?

Does the game not load for anyone else?

The game loads just fine for me. Check your browser extensions, probably a conflict.

Huh, works fine for me now. Guess that was a fluke.

"Sounds" good, but I ain't got no image. Only sound.

Black here too, on Opera and updated flash, what gives?

Well, I for one can't believe that they had a video advertisement with sound before the game. That was annoying.

I started out enjoying the game. Great memories of old racing games.

But why is it that the first level I can turn a corner without losing traction, but I can't even keep up with the normal cars on every level after that? Every corner I have to slow down to almost a stop to keep from sliding off.

And the collision detection is decidedly early-to-mid-90s quality.

I can only base it on music.

And that is decidedly early morning, BBC 2.

[Edit: There is still no problem with the game loading that I can see. Have you checked your browser extensions? Tried another browser? -Jay]

I cannot play the game. I have tried Firefox and Internet Explorer and get the same results in both.

I have also tried playing the game from various web pages as well as the link on this page. On some site I see nothing but hear some music. On other sites I can see the welcome and track selection pages, but once I select a track the screen goes black but I can hear new music.

As I said I get exactly the same results for the same page in both Firefox and Internet Explorer.

I don't know what checking browser extensions means for comflict means. In Firefox I have Shockwave Flash 10.0.32.18.

I tried it on FF and Safari on OSX, and on IE through Parallels, and just sound for me too :(

Same here. Only audio, then my browser freezes for five seconds and music plays. FF on Linux. Tried Opera too. The loading meter is stuck on 0% throughout.

This seems to be the case with every game on that site for me. Tried other ones at random, including Cyclomaniacs, which plays fine on Kongregate.

I think something is wrong with their loading system.

It plays just fine for me, but I'm using IE6 and everyone (JiG, GameNinja, etc.) is showing pop-up boxes saying me I need to upgrade.

Which is kind of ironic, because if I upgrade, I apparently won't be able to play. :)

[Edit: Not true. I am able to load and play the game in both IE8 and Firefox. So, no worries about upgrading. Besides, ditching IE6 will provide 16 meals to a hungry person. -Jay]

I got around the problem by opening the flash directly.

The startup screen loaded fine for me, but when I clicked continue, it went black. I could look at the upgrade screen.
I was using Vista, FF3 and IE 8, Jayisgames website, and Flash 10.

[Edit: You'll have to play it at GameNinja. The links in the review above will take you there. -Jay]