Hello? Is it me you're looking for? Once you've played Ryuuchi Tachibana's eerie indie horror game Hello? Hell... o? (translated by Vgperson), you'll probably hope the answer to that is nooooope. You play a depressed young man whose days seem to drag by in his lonely, isolated apartment, dull and unchanging. Use the [arrow] keys to move and [spacebar] to interact, and don't be afraid to try everything since with thirty-seven different endings, there's a lot to find. You'll have to look beyond the ordinary monotony of the protagonist's existence and keep playing every time you end the game, because there's a lot more to this story than meets the eye, and this apartment is anything but ordinary. 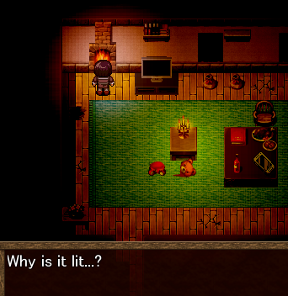 To say this game is an odd duck is a bit of an understatement, and for some players its unusual means of progression is going to involve too much trial-and-error without much feedback to know if you're actually making headway. In a lot of ways, it feels like a short story Stephen King would have written, or an episode of The Outer Limits, and slowly piecing everything together from the increasingly unnerving changes happening in the tiny apartment is remarkably effective as a means of creating tension. Considering how small the area you're in is as well as how short a playthrough to get an ending can be, sometimes as little as seconds, replaying rarely feels like a chore. You know... unless you hate jump scares. It sort of feels like a freakish spin on Every Day the Same Dream, and equally as open to interpretation, though whether it's as successful is up for debate largely because Hello? Hell... o? seems like it requires a lot of interpretation.

When you get the Happy Ending, you might be tempted to stop, but (and here's where it get difficult to talk without ruining everything) considering booting the game back up even when it doesn't appear you should. The game's abstract approach to progression and repetitive nature won't appeal to everyone, and at least one of the endings is so silly and out of place it almost destroys the mood, but Hello? Hell... o? pulls some exceptionally clever tricks to both tell its story and toy with your perception of it to make it unique and well worth checking out.

Free installation of the RPG Maker VX Ace RTP is required to play.

Endings necessary to finish the game = !
Other endings that may help you understand the story = *

Thanks to Alice for the walkthrough!

Alright, friends and neighbours, here's the best explanation I personally could come up with after getting the True Ending.

My interpretation is that it's not two universes, but rather a simple haunting. I believe Akari is the woman you hear about having died a month prior on the television, and the male protagonist has been living with the guilt because it happened after they had that fight about their anniversary. His guilt is manifesting himself in a haunting in his apartment, and the Ghost Akari you get the "happy ending" with isn't the real Akari... just a specter he's making piece with himself with. When he says he's staying with her, it's actually NOT a happy ending, because he's saying he's going to stay living with his guilt in the apartment instead of moving on.

When you play as Akari, you're playing as a soul in torment from a shade that looks like the male protagonist because Akari believes he hates her after that big argument before Akari dies, and her regret and guilt over that is keeping her in a sort of purgatory alongside him in real life. In the "true" ending, I think he actually IS pulling the real Akari out of the underworld, and he finally leaves the place he's been slowly killing himself with his guilt in ever since her death. Pulling someone out of death may SEEM far-fetched, but, well, consider what we're dealing with already. An alternative is that the true ending is more symbolic than anything else, and when you pull Akari from the fireplace, you'll pulling her spirit out of darkness but also taking the memory of her, the REAL her (as someone who loves you and wants you to be happy), with you as you leave to start a new life.

Wow, that was really fascinating. I like how the gameplay tricks you into thinking you've finished when you haven't.

I got 27 endings, but they're not really endings, as the protagonist keeps thinking it's over when it's not as he goes through mourning. The game even ends and forces you to quit, the character is that certain about how much he is over what happened. Of course when you do resume, you pick up right where you left off, in a frightening but familiar place. Perhaps this is symbolic of his mourning and his coping mechanisms.

It's really hard to explain how these "endings" work in some cases but I will list the ones I found and hopefully someone else can fill me on what I missed. Endings are in the regular world unless it specifically indicates the "mirror" world and a "?" designates an ending I did not find.

Endings with No Numbers

Note that the game apparently has 37 endings and my numbers 1-30 plus 6 unnumbered come up one short. Feel free to correct my list if I got anything wrong - and hopefully someone can find the endings I missed!

Thank you so much for warning that this had jump scares in it. It's such a shame that so many horror games rely on screamers or jump scares to freak their players out. I enjoy a good horror game, but don't enjoy things jumping out at me :c

This is a cool game!

Troy, the jump scares are not nearly as bad as in some scary games I've seen. None of them have really startled me.

Ottoman, I have found a few more to add to your list.

#13: Read the book a second time = ask for forgiveness end

#21 scary face = her end
(I saw a scary face in the regular world and suddenly it ended, maybe a random event? It hasn't happened again)

7th unnumbered ending/Why must you run? = search room and then run away.

So I am still missing

The endings are listed on the bottom of Vgperson's download page.

So I really want to play this game, sounds sooo cool and right up my ally... except for the whole jump scare thing. Could someone please describe some of the things that might startle me? I played Snowdrift and the jump scares in that made it so that I couldn't actually play it, but had to watch someone else do it and cover my eyes when I knew the images were coming. So much thanks to anyone who can give me a quick description!

As far as the jump scares go, I would rate them mild - to me it was less scary, more generally really creepy things.

For example, the occasional image flashing so fast you can barely notice it (at first I thought I imagined it), things breaking or moving abruptly, and lots of creepy sounds. There is also carnage at points - some blood, some suggestions of violence and some acts of violence usually involving decapitation.

Hope that helps you decide. Honestly I think it's less scary and more creepy, though a couple of the things I listed did get my heart going a little.

In my opinion, if you think you'll like it then give it a try - nothing ventured, nothing gained!

Endings necessary to finish the game = !
Other endings that may help you understand the story = *

Thanks to Alice for the walkthrough!

OMG this game is freaking me OUT! The weird game mechanic is CREEPY!!

24: Sneak Attack (look at the mirror and bear (the one that says "im feeling alive" or whatever is that) in mirror world when the phone ringing)

#24 oh and walk into bed (take the shortest way)