Heroes of Sokoban III: The Bard And The Druid

So there was this game, Heroes of Sokoban, where red warriors, green thieves and blue wizards quested for doors in their own special way. Then, there was Heroes of Sokoban II, where the red warriors, green thieves and blue wizards faced off against dragons and goblins with the help of their new ally: yellow priest. Now, however, many centuries have passed. The dragons have died out, and in their place new heroes have arisen. Now comes their chance to occupy a few doors, in Heroes of Sokoban III: The Bard and the Druid, a new level pack in Jonah Ostroff's series of Puzzlescript-powered Sokoban puzzles. With the [arrow] keys Warriors push crates, sticky-fingered Thieves pull them along, Wizards swap places with the first obstacle in the direction he's heading, and Priests are immune to monster attacks and protect adjacent allies. You switch between the heroes with [spacebar], trying to navigate all heroes onto does without killing them. There will be buttons that open closed paths, that shut just as quickly when who or what is standing on them are removed, deadly goblins who kill upon contact (including each other), and doors that refuse to open until all monsters are gone. 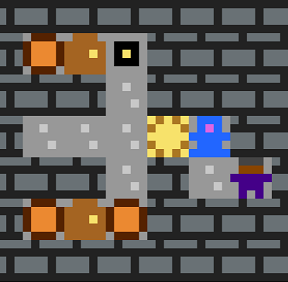 The new allies have quite the abilities though: First, there is Purple Bard. When you control Purple Bard, his charms crates, monsters, and allies within two spaces horizontally, vertically or diagonally. They will attempt to mirror the bard's movements when charmed, though, of course, this will be affected by obstacles standing in their way. Then, there is Orange Druid, who can turn wood into stone and stone into wood by touching it. Or rather, movable blocks into immovable blocks and immovable blocks into movable blocks. These new heroes definitely make for some clever puzzles and complications, and while the learning curve for the new elements is quite reasonable, new players will want to get up to speed with the earlier installments first. Still a six person adventuring party makes for a great sokoban party, and hopefully this sokoban party won't stop!

Play Heroes of Sokoban III: The Bard and the Druid

Maybe in the next game there'll be a gray Berserker who kills anyone he touches, monster or hero. There'll have to be some puzzles that take advantage of that.

Would the yellow priest be immune to a berserker-type character?

Perhaps some hot-keys are in order?
I don't mean to complain, but cycling through 6 characters is starting to get a bit cumbersome.

Lastly, I love how every installment ends with a big level and all the characters then rewards you with a little cake-walk level afterwards.

I'm having trouble with the level with four buttons and three boxes. Any help?

How can I move the two goblins?? Help!

billyswong,
You need to move the first green goblin over toward the right wall of that middle box as part of getting him out of the way. If you do it right, you'll later be able to push him down next to the other goblin.

billyswong, you can only push that goblin towards the right wall when he's in the center of the room. (The warrior pushes from the room to the left, with the priest in between.)

I'm stuck on this level. Thank you.
http://www.gifti.me/i/rYqGfns.gif