Hidden Expedition: The Crown of Solomon

The adventure begins with the discovery of a fabled lost tomb and priceless artifact that has been lost for centuries. This means, of course, that soon will follow betrayal, theft, murder, and hidden object finding. Yes, the agents of the Hidden Expedition League of Preservation (H.E.L.P.) are back in another rollicking adventure, Hidden Expedition: The Crown of Solomon. Produced by Big Fish Games and Eipix, this adventure hybrid really gets going with sudden defenestration (well, being thrown out of a plane, not a window) high over Turkey, and rockets through several exotic locales as you fight to solve the mystery of the Crown of Solomon while trying to discover the mole in your own agency. The life of a Hidden Expedition operative is never easy, is it? 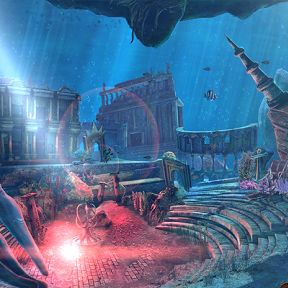 Hidden Expedition: The Crown of Solomon plays like a standard adventure hybrid with a simple point-and-click navigation, customizable difficulty levels, and a plethora of puzzles to play and hidden object scenes to solve. The hidden object scenes are a special delight, each one at least three layers of ooey gooey object-finding goodness featuring lists, drawings, silhouettes, groups, and other surprising challenges. The mini-games — on the other hand — while entertaining are a bit on the easy and familiar side. This is a Big Fish/Eipix production, so you can take it as read that the visuals and sound are the usual delight. All of the bells and whistles are present such as collectibles, morphing objects, and other side quests. The story also delights with its twists and turns and sudden death situations. The cheesy and over-the-top voice acting and animations only add to the pleasure.

Other than the too easy puzzles, the only other downside to this enjoyable diversion is that it can easily overload older graphics cards, causing technical difficulties for those with older computers or systems. But hey, this is Hidden Expedition, one of Big Fish's flagship series, so it is definitely worth the trouble. There are a plethora of entertaining characters to be found, like the treacherous co-pilot, the bartender with the bad Scottish accent, or the woman who has been stranded in the arctic just a little too long. Really, don't ask her about Mr. Fluffy. The focus here is on the story itself, with the hidden object scenes and mini-games flowing naturally as wander through this classic mystery adventure narrative. Time to mount another Hidden Expedition!

Note: Hidden Expedition: The Crown of Solomon is currently only available in a Collector's Edition, which includes wallpapers, music, animations, extra gameplay (including both a new adventure and the ability to replay each and every hidden object scene and mini-game), and a built-in strategy guide. Remember that Big Fish Game Club Members pay only $13.99 for Collector's Editions, and collector's editions count 3 card punches of 6 total needed for a free game.