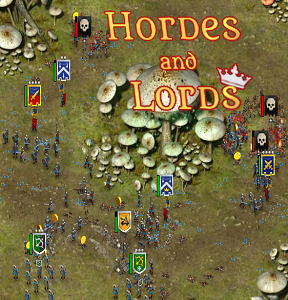 Good morrow, fair ladies and gentle sirs! Come hither for a most lovely tribute to your fine tastes! I give unto thee Hordes and Lords, a quite beguiling tactical strategy RPG game created by Oroboro Games. All mock renaissance speech aside, the country of Ingelron was once ruled by a jerk of a king but he came to an untimely demise in a questionable fire. The land is being plagued by bandits of all sorts, but one bandit has set his eyes towards a brighter future. Hardadjust, a fearsome warrior if ever there was one, is ready to be more than merely a criminal. He's ready to take over the land and become the new king. Easier said than done, which is why he needs you and a gaggle of other bandit battalions to help him.

At the beginning you have the option to choose between campaign and survival. Campaign allows playing the story line whereas survival is testing your ability to not be killed. If you choose campaign you will start off with two fighting teams, both of which will have their coat of arms displayed at the top left corner of the screen. On the battlefield there will be a patch of ground that is lighter than the rest of the field and that area is where you will place your troops. Left click on the coat of arms at the top to select it, then move your cursor over the spot on the ground where you will want to place the team. Click on the team and hold down the click to rotate the direction you want your band to fight. When your team is in position you can click fight and the battle will begin. You can choose to leave your teams where they are or click on the banner men and a blue arrow will appear which you can stretch to the area you want that group to go to. Throughout the fight coins will drop from dead enemies which you will have to collect by hovering your cursor over them.

Upgrades are available after each battle for your troops. You can choose to upgrade either armor or weapons but with each upgrade the price goes up. You can also buy an upgrade for the magnet which is used to collect the loot from your foe. As you go through the game you will also encounter other groups that, after the battle they helped in, you can hire them for a fee. On a plus side, after paying the hiring fee the group will stay with you for the entirety of your play. To help earn more gold you have the option to replay previous battles with no consequence for doing so.

It's not common to find a game like Hordes and Lords that not only has a generous upgrade system but also a story line told by such a wily narrator. One thing that seems needless is having to rotate your troops when, more often than not, they shuffle themselves to accommodate victory once the battle begins. It's a small grievance especially because the minute an enemy is nearby your warriors will move of their own accord to fight. It will be necessary to redo previous levels to earn enough gold to continue upgrading, which will in turn allow you to fight tooth and nail to the last battle site. Though the fights are short and don't require much help from you, the option to upgrade and add six more fighting groups boosts the allure of the game. With a cheeky minstrel to give you laughs and high enemy death counts abound, this game will keep you smirking with satisfaction.

Wahey! This is clearly an homage to Warhammer: SOTH and Warhammer: Dark Omen. Loved those games, hope to see more of the same. I mean, now that they've done the initial coding, why not a sequel with bigger battles, more strategy, more units etc.? Pretty please? :D

Not too bad, though kind of easy, especially if you spend the time to replay some of the battles for upgrade money. I never lost a battle, and there were maybe 2 fights I didn't get the red crown on the first time through (the final battle, and the early one with all the lancer troops--apparently, losing them counts against you same as your actual controllable forces).

Wasted potential. The graphics are really nice, but the battefield is just too small, half the time you just need to cram your units together and that works fine.

If the map was vast and there was some real deployment strategy, could have been interesting, as it is, you barely have to move your units at all and it's way too easy.