Here at JIG we like to offer an "escape from the everyday" for each Weekday Escape. So this week how about a nice vacation in an empty hotel? There's something... unsettling about an empty hotel, isn't there? Peer around the vacant, echoing corridors and you almost expect creepy twins, an old lady with a large knife, or — worse yet — the Carpenters. 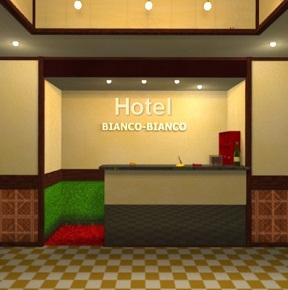 (Quick, name those three movies!) Fortunately for those of a delicate constitution, this week's escape game, Hotel Bianco-Bianco, features none of those things. All you have to do is escape the lobby, no ghosts involved.

Atmosphere aside, Hotel Bianco-Bianco comes packed with the standard room escape features: navigation bars to move around with, a handy inventory control that involves double-clicking objects for a close up, a changing cursor to indicate hot-spots (thank you!), and even a save button if you feel like stopping for a while and coming back later. All of the things that make life easier if you're a professional escape artist or just trying to get home.

Bianco-Bianco's escapes run a wide gamut, from quirky to creepy, to the sappily sentimental. What they do have in common, however, is quality. Beautifully rendered visuals, logical puzzles, slick design, these are always present when Bianco-Bianco brings us a new escape. There are even two different endings to discover.

Hotel Bianco-Bianco continues the tradition of quality design inherent in the developer's escapes. The eerily empty lobby aside, this looks like an upscale establishment, one you might not mind spending a night in. What follows is not the most difficult escape out there, but one that is clever, logical, and has a nice twist on the old theme of two endings. The quality shows everywhere, from the finely rendered backgrounds to the ease of navigation, from the simple inventory controls to the blessed relief of a changing cursor. Bianco-Bianco even kindly offers us a save button, although the escape is simple enough that you shouldn't need to use it.

Perhaps the only downside to this charming little locked room is the presence of a color-based puzzle, which can make the going difficult for some. Hotel Bianco-Bianco is not rocket science, but an escape game which illustrates how to create a good room escape game. A nice combination including use of found objects, puzzles, and a little ingenuity, and you should be out and looking for new accommodations in no time. You know, a place where there are actually living people? Never stay in a hotel where the clientele is conspicuously absent, that's all I'm saying. Checking in!

I'm embarassed to admit I'm stuck on that color puzzle you mentioned.

I saw the clue on the back of the circuit card thingie, and I have the clue from the tv. I've tried forming numbers using colors/position and position/colors (the clue was ambiguous since whether you count from the top or bottom you still get blue-102 to come out to 28). I have I = +; N = x; O = =, and assume I should do B + A x C = code for the box thing. But neither of the codes I got worked.

For what it's worth

I still have the circuit card thing and the piece from the hatstand with the weird hook on the end in my inventory. Everything else is greyed out, and I have not yet figured out how to pull the grey lever or open the red box

There is one little anoying detail, where I got stuck:


There is a very small "thing" in the ceiling on top of the reception counter. Just under the third lamp from the left.

That should be enough for a hint. Happy Escaping :)

I have some complaints about the color puzzle.

First off, there weren't any clues specifying how to combine the color-number and code-number for each of A,B,C. I got that part right on my first guess, so that wasn't too big of a deal. What bothers me more is that the computation didn't use correct order of operations. Multiplication should be done first. I got the correct answer by typing the equation exactly on the calculator, but it still bothers me. Last of all, it took a while for me to realize you have to zoom out and click on the notch after inputting a code. Even after I got the correct code, I kept looking for another one because I hadn't noticed the notch.

Despite my complaints about the puzzle, this was a nice game. The graphics are well done. Some muzak would really help to complete the atmosphere.