Epic is an overused adjective nowadays, especially in gaming. Get a few swords, add an elf or two, et voilà, you have an epic adventure. Slay some orcs from a safe distance using some flimsy magic spell and it's "epic fight dude lol". So what about games that really deserve to be called epic? The ones where you wake up to the sounds of monsters tearing your world apart, and you go into four different dimensions on a desperate search of lost artefacts, and you have to defeat enormous snakes before they annihilate the Earth? Now, that is epic. 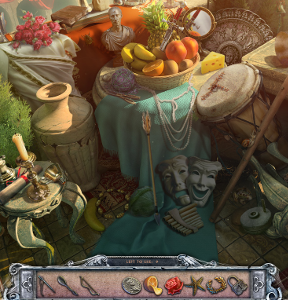 Kate has found herself in the House of 1000 Doors for the third time. Brought there by a mysterious stranger, she is greeted by all the house keepers, who will try to help her fight off a huge reptile menace. And so begins House of 1000 Doors: Serpent Flame, Alawar's new hidden-object adventure. Now gather round and pay attention, this gets a bit tricky. See, once upon a time, The Light Ones roamed the Earth and acted as mentors for the human kind. At one point, they fought Nagas, the terrible evil serpent-like creatures, and won; as a consequence, The Light Ones had to leave humans and find a home elsewhere. Fast forward a few centuries, and the Nagas are at it again. They have sent a horde of horrific snakes to bring Earth to its knees. The light Ones reply by dispatching our mysterious stranger to fetch Kate, who is tasked with activating the only weapon that can save the world.

In order to do this, Kate goes through four doors to different epochs (and is incredibly lucky, since all the people there speak flawless English). Exploring these places means finding objects, using them on other objects and solving puzzles. Manipulating items is a breeze, since most of it is nicely intuitive; on the other hand, there are so many rooms that it's quite natural to forget half of your tasks. But never fear, because there's a lovely map with hints you can turn on or off, allowing for quick travelling and a relaxed gameplay. The puzzles are, for the most part, somewhat simplistic, and solved a bit too quickly, so they don't offer much of a challenge. The hidden-object scenes come in two varieties – traditional lists and the put-items-back-in-their-places kind. 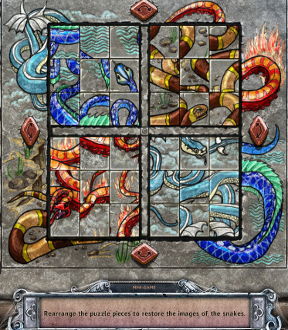 Certainly the game's strongest point is the story. It is simple enough at the beginning, then branches out into four story lines as Kate steps through the doors, then opens up to reveal an entire little mythology in its own right. Even though at times you might get lost in the intricacies of the plot, by the end it all comes together to form a tale of thrilling proportions, especially among casual games. Such a powerful narrative demands appropriate artwork, which is duly delivered. The scenes range from dark and desolate to gloriously bright, but they are all equally sharp, detailed and imaginative. Some cutscenes are so impressive that they might make you think they belong in a fantasy film (mediocre voice acting aside), and they certainly add a whole new level of excitement. A long and slowly unwinding story like this one also takes time to be told, so expect at least four hours of world-saving action.

It's hard to say what exactly makes House of 1000 Doors: Serpent Flame such a unique experience. It must be the very successful blend of a familiar essence with an intriguing, larger-than-life twists, gorgeous graphics and solid casual gameplay. Definitely check out the demo, and don't be fooled by the slow start – this game is epic.

House of 1000 Doors: Serpent Flame is currently only available in a Collector's Edition, which includes a bonus level, concept art, wallpapers and more. Remember that Big Fish Game Club Members pay only $13.99 for Collector's Editions (or 2 club credits), and collector's editions count 3 card punches of 6 total needed for a free game.