Scattered across the land, the adorable little mokis are in trouble. But guess what? You get to rescue them! Using bombs! iBlast Moki 2 is Godzilab's follow up to the epic iOS physics puzzle game iBlast Moki, and it stuffs every ounce of material you could want into a single robust mobile package. Time to (safely) bomb some mokis! 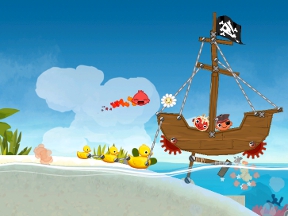 Your job, owner of the spiffy touch screen device, is to get every single moki to the pulsing red exit. These guys are pretty lazy, so they really won't help you very much in the process. Fortunately, mokis are remarkably resilient, able to withstand any number of close-range bomb blasts and survive some of the strangest potions and liquids one can dream up.

As per the structure of most physics-based puzzle games, iBlast Moki 2 takes place across a series of worlds, each subdivided into levels you can work your way through from beginning to end. Naturally, the difficulty and complexity gradually increases as you go, so expect to spend more and more time with each area the further you get in the game. Individual stages are unlocked groups at a time, so if you ever get stuck on one puzzle, you can easily hop to another one for a little break.

The inventory bar on the right side of the screen holds the items you can use in each stage. Bombs are pretty standard (though you won't have them in every stage) and can be placed next to mokis to send them flying. The closer the bomb, the farther the moki will go once it explodes. You can change the timing of the bomb's explosion by twisting the wheel around an individual bomb, allowing you to set up chain reactions and delayed explosions with great precision.

In addition to bombs, iBlast Moki 2 makes heavy use of something new and fun: paint bombs. These colorful little critters explode and can be delayed just like regular bombs, but instead of sending mokis flying, paint bombs cover the immediate area with a physics-altering coat of paint. Want a moki to zip through an area? Try a yellow bomb. Need to jump? Red bomb! Want to glue something together? Green is your friend. In addition to paint bombs, you'll also make use of ropes, balloons, metal rods and more, all adding a thick layer of construction to the already dense physics puzzle game. 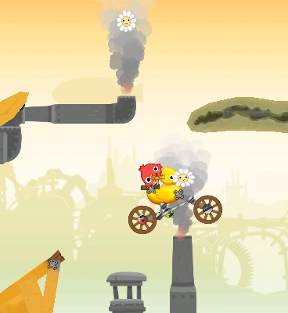 Analysis: iBlast Moki 2 is exactly what a sequel should be. The original iBlast Moki has been a shining star of the iTunes App Store since its release back in 2009. The sequel does nothing but improve that experience, keeping the same quirky level design intact while adding new items that expand and diversify the gameplay.

iBlast Moki 2 is quite the social game. You can view friends' solutions to levels with the tap of a button, showing a replay of their crazy/smart/crazy smart bomb placements that earned them passage to the next puzzle. The level editor is also a blast (yeah, terrible pun there) and lets you both create levels and play stages crafted by other iBlast Moki 2 players.

Sagging a bit in the middle, some of iBlast Moki 2's levels break the game's habit of providing genuinely thoughtful puzzles and resort to recycling the old. In these stages, you immediately see the solution to the level, but beating it requires loads of trial and error, bomb timing adjustment, and minute positioning of items. It's sort of jarring to have these sprinkled around the otherwise strong set of levels, but they far from ruin the game.

iBlast Moki 2 is stuffed to the seams with features, levels, and creativity. It's a huge package for anyone to digest and has a lot of elements you don't normally find in mobile games. For a physics puzzler, you can't do much better than this crazy title.