This game received a rating of O for infrequent profanity and pixelated blood.

In a distant future, humans have abandoned the polluted ruins of Gaia to live peacefully among the handful of alien races out in space. But when a renegade group of humans bust out of a space station and steal some ships to commit what can only be dastardly crimes, it's up to their former companions to save the dignity of humanity and find out what's going on. Discover what a sticky situation alien politics can be as you control Maddock and his eclectic crew through Matthew Ashworth's free indie science fiction RPG, Incitement. 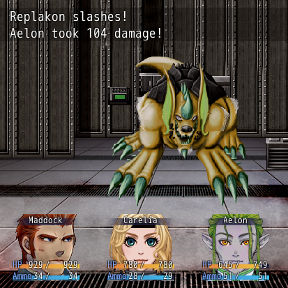 Those familiar with the structure of JRPGs will have no problem jumping right into this title. You wander around different environments and fight enemies that you randomly encounter with your party, and you complete the quests set before you to advance the story. Along the way you'll be given dialogue choices that will ultimately steer the viewing of the end either towards good, neutral or bad. One mechanic that may seem new is in place of mana that one would normally see in a fantasy setting like in A Very Long Rope to the Top of the Sky, Ashworth has instead used ammo. This would make sense given the futuristic surroundings and the fact that all the characters are toting guns of one form or another. The inclusion of ammo, which doesn't regenerate over time or replenish from rest, gives a new dynamic to item structure. If you don't have spare ammo to reload your supply, you can't attack or use your special attacks.

Where Incitement shines is in the little details that make a great game: the storyline is solid, nothing original but told well, the mechanics force you to think about your actions instead of just 'Press A to win' and it's all put in a package that looks interesting and sounds amazing! This is truly the first time that a game has had me pause the action so I can rock out to the boss battle theme for just a few minutes longer. While some players may be disappointed that everything in the game seems to be handed to you since little-to-no grinding is necessary, for an experience that promises 10 hours of gameplay, it's sure to satisfy those looking to kill a long afternoon and rock out 16-bit style like it's the mid-90's.

Can't get enough? Go here to check out the beta for Incitement 2!

Note: You may need to download the RPG Maker VX Ace RTP, which can be downloaded here, to play the game.

Is there any way to mute the sound?

Konrad -
You can access the option for muting by pressing F1.

Ahh O is for Orange not zero.

Is there anyway I can use my xbox controller to play this game?

dmannenkov -
I haven't tried using a controller myself, but if you press F1 in the game, it pulls up a menu that has a Gamepad tab that I assume would allow you to use the controller of your choice.