Ironclad Tactics is a turn-based strategy game created by Zachtronics, the studio behind The Codex of Alchemical Engineering and SpaceChem. Set in an alternate-history post-U.S. Civil War era, the game pits you against the Confederates as you march your way across the country, one town and one battle at a time. There's a twist, however: steampunk technology is a thing, meaning your infantry units will have to take on ironclad contraptions and well-equipped automatons in addition to gunslingers and musket wielders. It makes for a really entertaining setting, but you'll feel bad for those squishy human soldiers. 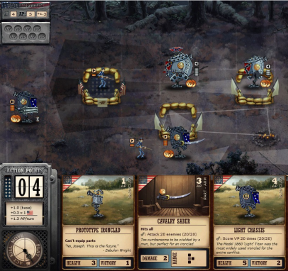 Ironclad Tactics uses cards to represent everything you can do. At the top is a 9x4 grid where opposing forces meet in battle. Below is your hand, a scant five cards that are drawn randomly from the deck you create. Cards come in a number of types from around half a dozen factions, ranging from combat units to tactical actions, equipment for certain machines, and even extra things like hats and a cat. Both of which serve a purpose, of course. Each turn you earn action points that can be used to place cards. Your goal is to march your forces across the field to deliver tokens behind enemy lines. The objectives vary between levels, but the basic idea remains the same: protect your front, hold key positions on the battlefield, and keep a good balance between offensive and defensive playing styles. It's much easier to write it out than it is to actually accomplish, which is one of the many things that makes this game so intriguing. 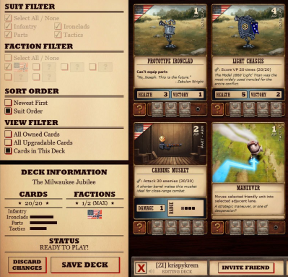 Analysis: Ironclad Tactics isn't as foreboding of a game as KOHCTPYKTOP: Engineer of the People or Bureau of Steam Engineering. It's surprisingly easy to learn, but the tactical depth is practically bottomless. The game twists your objectives around so you never slip into complacency. Just when you think you've got things figured out, the next level throws you up against half a dozen ironclads and says "ok, now just stay alive for a few minutes". No problem, game. No problem.

Story mode is full-featured and takes you through a journey across the continent, complete with comic-style cutscenes that push the story along. Co-o allows you and some friends to join forces against the Confederates, and many stages have competitive skirmish modes or puzzle modes you can play to unlock additional cards. Plenty of alternative strategic action to indulge yourself in, all in the name of upgrading your cards so you can face the challenges that lie ahead.

Ironclad Tactics hits a sweet middleground for the Zachtronics team. It isn't the kind of game you have to earn the equivalent of a PhD in just to complete, but it's not something you can pick up and blaze through without breaking a sweat, either. The depth of strategy and the undeniably addictive act of collecting and upgrading cards will keep you thoroughly hooked until you see things through to the end.

This looks amazing! Wish there was a demo.

Yeah, $15 is pretty steep, but if one thing is for certain, Zachtronic Industries makes games that are worth it. I still play SpaceChem, and Infiniminer was the prelude to Minecraft.

I have too many games to play right now, and this looks like it would suck my time down a hole, so I will likely wait, at least for a Steam Sale, or an Android Tablet version.

This game would be a fantastic fit for mobile devices. I hope they've got plans to port it, I'd definitely buy it again.

And if it helps, $15 felt like a very fair price for the game. I even bought the two pack so a friend and I could play co-op.

Thanks, John. I'm careful about what I purchase, but you guys are right--Zachtronics' stuff is always good. Codex is still one of my favorite browser games of all time. Well, I'll put this one on my list.