Bedtime for most kids growing up is dreaded. It means stopping gaming or your favorite TV show, and trying to lay still in the dark when you'd rather be up and running around. But in this narrative the young eight year old you're playing as has much more reason to dread going to bed. There is something else in his room, just below him in the unoccupied bunk. Even though he is plagued by nightmares it is clear he'd much rather be sleeping than having to listen to that raspy breathing. It Moves is a free indie horror game based off a wonderful Creepypasta... which you shouldn't read until after you've played so you don't spoil the game! SnowOwl is not new to horror games, giving us Rust and Blood for one, and knows how to do justice to the original piece. The daily (nightly?) nightmares are where you are able to take control and explore the surreal mind of the young boy. There are a few puzzles to solve and mazes to be conquered but in the end this game is all about the story and the creepy atmosphere Snowowl masters. 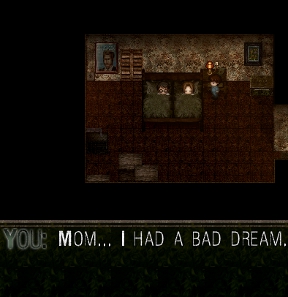 It Moves promised to be able to be scary without the endless jump scares that are dominating the horror games recently, which are not necessarily a bad thing, (see Five Nights at Freddy's and Five Nights at Freddy's 2) or not, if you have a faint heart or weak bladder), but it is nice to see more variety in scare tactics. This does not mean that there isn't any in the game, but it is balanced out with the equally terrifying atmosphere. Playing this alone in the dark is probably going to keep you peeking behind your shoulder to make sure you really are by yourself. Heck, playing this game in the bright of day is still going to give you goosebumps. The game contains the full Creepypasta in its text, so there is no need to have to read the tale first. The only difference SnowOwl adds in is the dreams you must transverse and all they do is skillfully add another layer of terror to the game. There is no real 'winning' or 'losing' in It Moves, but that's not the point. The point is fabulous storytelling and It Moves really delivers.

Why did you remove "galaxy harvest" review you just posted ? It happened many times that you delete a recently made review, what the hell ?

The review was accidentally posted before it was ready. :) I don't think it's been done many times before. It was a simple accident, no need to get upset.

I'm not upset, I was just really surprised that some work become useless simply because the review is deleted. I saw it 2 or 3 times, since they were games I didn't like I didn't wrote their names.

Mac users take note: at least on my system, this does not appear to be one of those games that's compatible with RPGHub. The display's completely corrupted.

Sorry, your comment came across as being angry. As I said, the review was not deleted, it was simply published by accident as the writer was working on it, so it is unpublished until the article was finished. In the future, if you ever have another question about something related to the site, feel free to ask on the support page. :)

Sorry about that! That's why we include the link as an option, but opt not to actually tag the review with Mac compatibility or make it the official download link. Hopefully as work continues on the tool compatibility will expand!

Is there any way to re-size when playing in windowed mode? I know that I can go to full-screen, but it is much more difficult to play that way... when I am supposed to be working ;-)

So do I understand from the review that there *are* jump scares in this game (just not endless ones)? Any at all is usually too many for me...

There are jump scares. But no screamers [those end a game for me.] At no point will a black screen turn suddenly into a horrible picture made to knock you out of your chair. But there are things in game that count as a jump scares. Usually things running across the screen. And at one point a faded face is in the background for a good while.

Hope this clarifies things. If you decide the game isn't for you, you should still read the story. It's wonderfully creepy ;)

I read the story that this game is based on, and it was creepy as heck. And then I played this game.

I will NEVER play it again, but I promise that's actually a compliment. Let me explain.

This game scared the everloving **** out of me. Due to computer issues, I've not been able to play Amnesia: The Dark Descent at all, but if it's any scarier than this, I will be genuinely surprised, because this game made my skin crawl in directions I didn't even know it could go.

A fantastic and well made game. The atmosphere is perfect, the dialogue placement is fantastic, and all the jump scares are just right- that is, they're more subtle and creepy than they are "BOOGA BOOGA BOOGA!" screamer-types.

Blend all of that into a beautifully dark story of abject fear and finish it all on the first chapter, and you have a recipe for a game so scary that I cannot play it again for fear of being literally scared to death.

This game deserves full marks, 5/5. Its creator, and the author of the original story, both deserve my utmost respect. I will never play it again. Well done, good sir.

Okay, I finished this yesterday and was going to post a comment that was all, "Oh, that wasn't that scary." But then last night...it wouldn't quite get out of my head while I was trying to go to sleep. Not the best feeling 0.0

But overall, I did find the game more sad than scary.

I have had deep and personal experiences with pure terror, and to think of a child going through that breaks my heart. Also, I remember being a child and being afraid to talk about things that were bothering me because surely I was the only one in the world going through them, and surely my entire life would be turned upside down if I brought them out in the open. It really struck close to home, even though thankfully the experience of the little boy in the story was not literally similar to mine. The emotions were very authentic and the author gets major points for not losing sight of the intricacies of a child's mind.

As far as the gameplay goes,

I would have liked more interaction. The maze puzzles took entirely too long and were not always intuitive. I ended up resorting to watching playthroughs to figure out what I was supposed to do on the more twisty ones where all the paths looked so similar. I think stuff that was repeated, i.e.

the hall with all the shriveled baby dolls (did I walk down that 10 or 20 times?) and all the different switches to flip and red things to find in the mazes

could have been greatly reduced in number and have had the same effect. Too much repetition, in my mind, creates tedium.