Jack of All Tribes

From Divo Games, creator of Sea Journey and the Be Rich! series, come a time management/simulation game that will really sweep you off your sandals. Jack of All Tribes is a bit like Virtual Villagers meets Totem Tribe while they're having a party at Build-a-Lot's house. You take on the role of Jack, unwitting chief of a tribe, and help the various prehistoric peoples get along better while you spruce up their villages. It's a very well-built game that hits that "one more level" mark perfectly, and you won't be able to put it down until the end. 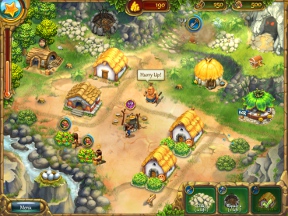 Jack finds himself dumped into a prehistoric village after a rollercoaster ride goes a bit differently than planned. The people here think Jack is the stranger foretold in legends who will bring peace back to the land. To fulfill this legend, you'll travel across the continent, helping neighboring villages in trouble and doing your darndest to keep everyone busy and content.

A few simple resources, a few level goals, and a couple of buildings are your only concerns in this game, freeing your attention up to concentrate on the fast-paced gameplay. Each level has two or three objectives you'll need to complete before you can move on. Tasks range from building a certain number of huts to gathering resources such as gold, food or wood, and upgrading structures to a certain level. Some buildings generate wood and food on their own (provided you assigned a worker or two), while huts add villagers and provide a bit of steady income.

At the root of Jack of All Tribes' gameplay is keeping villagers happy. Happy villagers are better workers, so your top priority is always to take care of their needs. Fortunately these people aren't too demanding, asking only for food once in a while, a light cocktail, and maybe a dip in the hot springs. Watch your workers and schedule a break when they need one!

Special events play a big role in Jack of All Tribes, and it seems like every level has at least one or two surprises. The best of these are strange areas you'll have to explore, such as the "iron bird" you have to investigate in order to remove items that shouldn't be in this ancient land via hidden object scene. Helping visitors and exploring these areas costs gold, so make sure you keep the villager work queue well-stocked! 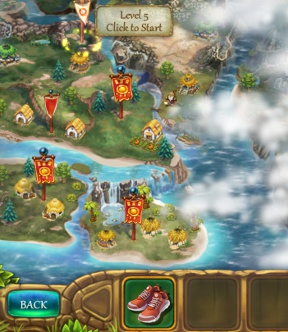 Analysis: Ready for a surprise awesome game? Jack of All Tribes will probably catch you off guard with how addictive it is. The gameplay is stripped down to just a few basics, focusing on moderately fast-paced action instead of heavy resource management. What this gives to us lucky players is a streamlined experience that requires just the right amount of quick reflexes and thinking, and there are plenty of surprises and bonuses to keep you intrigued as to what's around the next bend on the map.

Trophies and bonus items aren't a necessary part of Jack of All Tribes, but man are they fun to collect. Most of them will be found via natural gameplay, such as getting a trophy for cutting down a certain number of trees. The items are found at semi-regular intervals and give your crew small boosts in performance, allowing them to walk faster or get a burst of speed after taking a meal. And when time matters as much as it does in this game, little things like that really help!

Jack of All Tribes has around 40 levels to play through, which is worth several hours of solid entertainment. You can strive for perfection in each stage by completing the tasks before the timer runs out, but other than that, the game ends before you really want it to. The length feels right, however, but when a game pulls you in as efficiently as this one does, no amount of time seems to be enough!

A brilliantly-concocted mix of time management and simulation genres, Jack of All Tribes will keep you pleasantly busy and entertained with its feature-rich gameplay, plentiful bonus bits, and gorgeous visuals.

Jack of All Tribes - Tips & Tricks

Thanks to Kayleigh for the tips!

This game was really a lot of fun. Not too hard, not too easy. Although my sister did ruin it a little by pointing out the "educated man teaching savages" thing in the game, so it's kind of like VV5 in that respect. (a game that I also liked xD)

Is it just me or do your character and Rainbow, his native guide, look a whole lot like John Shephard and Teyla Emmagan?

Jack of All Tribes - Tips & Tricks

Thanks to Kayleigh for the tips!

Compared to all the other levels, Level 17 was *sooo* hard... in one run, I missed the expert time by about 5 seconds D:

I am at level 28 but no matter how long I play I cannot get three buildings with a "big smiley". One always has a small smiley. Is there a problem?

lv17 is too hard in ordinary story but when you finish the other levels and get the fireworks!

This game is great fun. Is there a way to save progress and continue when you log back on? Not much point to have to start over from scratch each time. Please advise.

@ FOXY: Yes, there's a problem. The necessary statue is less visible for the third house (the second one you build) than for the other two. Moving your pointer around seems to help find it.