Joan Jade and the Gates of Xibalba 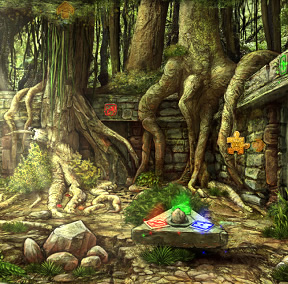 Pity poor Joan. She and her husband are enjoying some clearly deserved alone-time while the kids are in the Yucatan volunteering on a summer archaeological dig. Of course, something goes wrong almost immediately, as a nasty storm hits the area where the kids are and, surprise, surprise, they have gone missing. It's up to intrepid Joan and her husband Bruce to fly to the rescue.

The bulk of the game is the adventure as Joan travels from the dig site to an ancient Mayan temple complex, where kidnappers have apparently taken the kids. Arrows appear to show places where Joan can travel as well as a handy changing cursor that turns into little walking legs. Cursor changes also indicate items that can be picked up or manipulated, and areas that can be investigated. Although most areas require some finding and manipulation of objects, almost everywhere are puzzles. Doors, chests, machinery, almost all of it requires the solving of multi-level puzzles. These are familiar games, pipe puzzles, sliders, etc. but the sheer number and variety add a lot to the gameplay.

There's a refilling hint timer, and all of the puzzles can be skipped after a certain amount of time. Everything you find and see goes into Joan's notebook which can be referenced later if necessary. Solve your way past certain areas and enjoy cut-scenes of Joan as she leaves letters like breadcrumbs for Bruce and the rescue party to find as she makes her way deeper and deeper into the mysterious, unexplored temple.

Analysis: Joan Jade and the Gates of Xibalba will appeal to anyone who enjoys logic and puzzling over simple hidden object finding, and to those who enjoy the challenge of the adventure. Reminiscent of the original Azada, Joan Jade is a game that relies almost entirely on logic and problem solving skills.

The artwork is done in a beautiful, hand-painted, water color style that just pops from the screen. The designers were certainly doing their homework, as each area is imbued with fantastic, intricate, stylized pre-Columbian art. Eerie music adds to the atmosphere as Joan works her way deeper and deeper into the temple. To keep the player engaged and coming back for more there are also lots of trophies to be won, a wide range of awards for finishing puzzles quickly and finding artifacts, encouraging lots of replay.

Will Joan find the kids? Well, what do you think? Although there is a satisfying resolution, Joan Jade appears to be setting itself up for a sequel with an amusing plot twist that happens at the last moment. Definitely something to look forward to.

If you enjoy lots of logic based puzzles and problem solving then Joan Jade and the Gates of Xibalba will keep you entertained for hours. Fun, atmospheric and challenging, Joan Jade will appeal to all those with a sense of adventure. So go rescue those kids!

This is a good, solid game. The hidden object parts - which I usually loathe - are well worked into the scenery, and you won't find some odd piece of cloud that represents your items. However, my main gripe is that the game is very short (little over one hour for me on the first playthrough), and it is very easy. There just doesn't seem to be enough puzzles of either kind - so once you finally start feeling the challenge, the game is already over.
The finish-this-puzzle-now-bar only adds to the easy mode. Seriously, it fills up faster than anyone can manage to complete most of the minigames, even with a perfect completion.
It's solid, the story is simplistic, the art is pretty, and they actually bothered to do some research when making it. But overall? Short, easy, full of plotholes, but pretty. Very pretty.