With the Minecraft and Terraria and other sandbox games going strong, Junk Jack X from Pixbits arrives with a lot of great ideas in tow. It's a sequel to the 2011 Junk Jack release that adds a number of new features and improvements, including multiplayer support for both online and offline play, creative and adventure modes, Retina graphics, and thousands of items to find, treasures to uncover, and objects to be built. It's one of the most full-featured sandbox games on any mobile device and will easily keep you glued to your iOS device for hours on end. 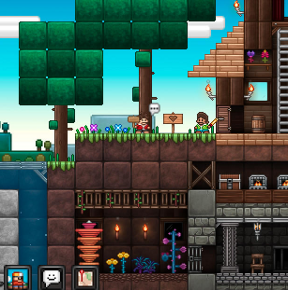 The basic idea behind Junk Jack X will be familiar to just about everyone now. You're dropped in a unique 2D world made out of breakable blocks, complete with individual biomes, living creatures, monsters, underground caverns, and plenty of treasures to find. Tap the screen to control your character, then tap to hit/harvest nearby blocks. Placing blocks is done in much the same fashion. Inventory and item management are handled with similar simplicity, allowing you to see and make use of all of the various materials you've picked up during your adventures. By building crafting structures you can eventually make weapons, armor, and more complex items, all of which come in handy when it gets dark and the enemies come a-knockin'.

Analysis: There's a very big debate amongst iOS users as to which game is superior: the mobile port of Terraria, or Junk Jack X. On the surface, both games are 2D sidescrollers and both involve copious amounts of digging, block breaking, crafting, and creation. When you get down to the details, however, a few features help Junk Jack X pull ahead by a few pixels. The most obvious of these is multiplayer: Junk Jack's got it, Terraria doesn't. In a sandbox world where gathering resources and working on buildings is just as important as adventuring, having other people around to work with can make or break the experience. Junk Jack X uses Game Center to quite seamlessly integrate games with your friends, and you can even join in four player local games! 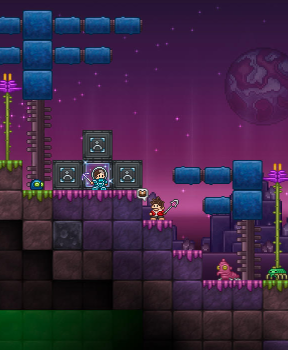 One other piece of information that floats to the top is that Terraria was originally a PC game ported to the mobile platform. Despite having some awesome controls on a touch screen, you can still get a slight whiff of the keyboard and mouse world the game grew up in. Junk Jack X has always been a portable game, built from the ground up for touch-based digging. Even if Terraria does get its own multiplayer mode in the future, Junk Jack X just barely edges it out. If the two were competing on the PC platform, however, we think the results might be reversed.

Debates and such aside, Junk Jack X really is a full-featured and capable sandbox game. It's packed with gorgeous artwork and thoroughly tested controls, gameplay mechanics, and crafting recipes. If ever you wanted to lose yourself in a world of digging and building, this is the game to do it in!