From 10tons, the heavy-hitting creator of some of our favorite match-3 puzzle games, including Azkend 2: The World Beneath, comes a game about destroying the entire world, one rock at a time. King Oddball is a physics arcade game that plays as sort of an upside-down Crush the Castle or Angry Birds, challenging you fling rocks from the King's tongue so you can cause as much destruction as possible. If that doesn't sound like it's enough fun, factor in the eccentric, internet-approved sense of humor and fantastic visual style and you've got a game you'll have to force yourself to put down. 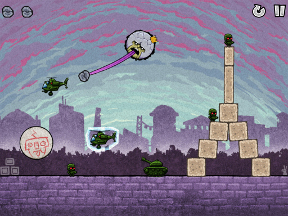 King Oddball, who looks a bit like an unripe cantaloupe wearing a helmet constructed from the fossilized remains of the offspring of a turtle and an armadillo (with a crown), seems pretty upset. He's so mad that he's flinging rocks with his tongue and trying to take over the Earth. The forces of humankind aren't going to sit back and watch, though. Since Godzilla is on vacation, the Earthlings send in the military, occupying squares of terrain that the King gradually moves through one conquered space at a time.

Actually playing the game is as simple as tapping the screen at the right time. The King nabs rocks with his long tongue, then swings them back and forth from his perch in the sky. When you want him to release the stone, tap the screen. To pass the level you have to destroy every tank, helicopter, and soldier below. Bricks and explosives are optional, but often useful in clearing the "bad guys" as efficiently as you can. You've only got three stones to throw (and maybe a bonus stone or two earned by pulling off combos), so be smart, be patient, and watch the tongue carefully! 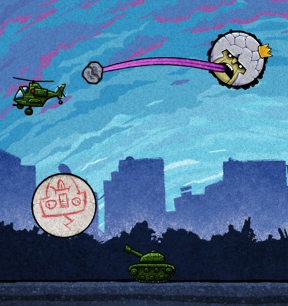 Analysis: It's easy to say King Oddball is similar to just about any physics-based destruction game on the mobile market, but naturally there are a few things that separate this one from the pack. The biggest is the inverted gameplay, placing the throwing mechanism in the sky as opposed to on the ground. It's a simple change but an effective one that makes mastering the art of destruction feel like an entirely new thing. And then there's the always-stunning visual presentation, a staple for any 10tons release!

Achievements and other bonuses are also a part of the King Oddball experience, and you'll be rewarded for pulling off stunts like using a single rock to beat a level, destroying multiple enemies with one throw, or finding and beating the secret moustache world! Apart from this, though, the game is fairly spartan about bestowing lavish extras and bonuses, preferring instead to focus on a game of skill and timing. It's not about chipping away at structures until they fall, it's about hitting that perfect rock throw so everything comes crumbling down as a result!

King Oddball is easy to fall in love with. It's a game that's easy to pick up and surprisingly difficult to master, especially if you want to shoot for those achievements. There's also a wonderful sense of comedic timing you'll appreciate, such as the moment after throwing your last rock when the music goes silent and the King watches in deflated disappointment as you fail the level. Go grab the game now and help the King throw rocks with his tongue!

NOTE: This game was played and reviewed on the iPad. Game was available in the North American market at the time of publication, but may not be available in other territories. Please see individual app market pages for purchasing info.

jay have u figured out how 2 replay moustache world...one of trophies depends on a replay of that world. I cant figure it out