King of Skeleton is a first person quasi-3D Flash game where you pilot a racer down an icy chute. Unlock longer, more difficult tracks by beating the target time, or go for the Olympic record. If you dare. 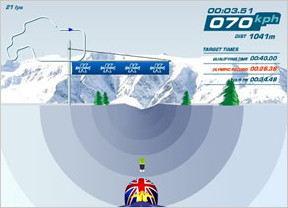 The game is based on the sport Bob Skeleton in which racers tumble head-first down the tube on a small sled. It's similar to luge, but more demanding, and maybe a bit cooler to watch. King of Skeleton stars Kristan Bromley, an athlete whom the author describes as "pretty good at [Skeleton]". In this game, that's all up to you...

Kristan stays on the lower part of the screen the entire race, showing his home country's pride atop his helmet. The game controls with just the left and right arrow keys as you slide him back and forth down the tube. The only goal is to stay on the course. Collect King of Shaves shaving gel to lube your sled and go even faster. Yes, you read it right. King of Shaves was actually Kristan's sponsor in the Olympic games, so the product placement is sort of justified.

A surprisingly interesting feature is the included form where you can challenge your friends to beat your top scores. While it's really an ingenius device to spread the viral game to your buddies, it does offer a primitive "slap in the face with a metal glove" feeling. All you have to do is click "Challenge A Friend", then enter a few e-mail addresses.

Analysis: This simple game is well done for a Flash title. It does a great job of simulating a 3D racing environment with the use of progressive shading. It feels like a real tube of ice.

The controls leave a bit to be desired mainly due to the lack of analog control. When the speed increases and turns get sharper, I felt a little out of my element trying to stay on course by frantically tapping the arrow keys.

When you fly off the track you restart at the same position, which is a nice frustration-beater. There are 6 tracks to play, each of which must be unlocked by beating the target time. There's a fair amount of challenge and fun to be had in this viral game, so give it a try.

Update: To unlock a hidden game mode (that's more difficult but a riot to play), click on the Options Menu then go to Game Modes. Enter "charlie" as your code and hit the tubes.

Thanks go to Bryan for suggesting the link. =)

Hmm..interesting :) Some brief fun. Although I haven't beaten the hardest stage, the others all fell in one attempt.

I found the very obvious progressive shading a bit rubbish and distracting; a smoother look would be better I think. While smoothness would detract from the feeling of speed, a simple background element could replace this easily.

Other than that, a few minutes of fun!

surely if you can see his helmet the game is in the third person? close up but it's still not quite first person

Beat it, and got the Olympic records on the first and last tracks. Whoo! Not bad for a guy who clicked over from his RSS reader expecting something spooky.

a similar game that, although it has a cartoon theme, has a very good implemention of a bobsled tunnel;
http://postopia.com/games/gamepage.aspx?siteGameID=117

They need ramps in this game.... with pirahnas... and if you have to make decisions at forks in the ice, and if you go the wrong way you go into a polar bear cave.

it's an ad for shaving cream

Neat trick -- when you do the "charlie" mode, let yourself go off the track. Pretty entertaining.