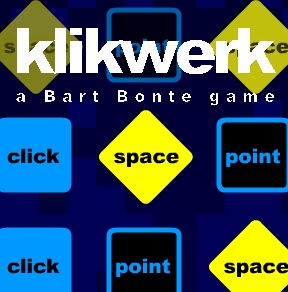 Playing Klikwerk is as simple as following the rhythmic directions as they pop up on the screen. When it asks you to Point, point to the box. When it asks you to Click, click the box. Drag the circles and Drop them on the holes when they appear. Hit [space] when asked for Space. It's like Simon Says, except there is nobody named Simon, and there's no trickery involved. All you have to do is be fast and accurate.

If you can follow the commands quickly after they appear, you'll score 100 points. If a command is left unattended for a longer period of time, it will start to fade, and its value will drop to 50, then 25 points before disappearing completely. It's important to be fast, because scoring 30,000 points or more will unlock a bonus round where you're challenged to follow an increasing swarm of commands as they flood the screen, and missing a single command results in the end. 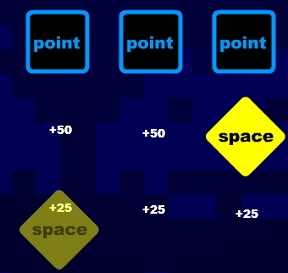 An-an-analyze. If there are two major downsides to Klikwerk, it's that you've got to be pretty agile with your mouse (which means it's very touchpad-unfriendly), and that you're given only one two-and-a-half minute track to play with. Granted, it's not terribly easy and you might find yourself taking a few attempts to be able to make it to the bonus round, but this game might leave you wanting more.

Bonte once again succeeds in creating a quirky gaming experience with simple style, but a tricky challenge. You've got to handle more than two commands per second on average, so you need to stay on top of the ball to keep alive. Once you've got that down, the catchy tune is just icing on the cake. Klikwerk is waiting, so as a warm-up exercise, click below to...

This just made my day. Now I just have to wait for someone to put the music on youtube and listen to it every once in a while :P

The clicks are the hardest for me. I can't move my mouse and click that fast!

...maybe I should try it with an external mouse instead of a laptop trackpad.

Yeah.. trackpad, not such a smart idea.. but I did manage 21500 with said trackpad, I'm sort or happy for that for a first try.

I thought it said KillWerk at first, I was really excited for a minute there!

Klikwerk.......Kraftwerk. No surprise it sounds uncannily like Boing Boom Tchak by the pioneers of techno from Dusseldorf.

Ah...shoulda read beyond "Bart Bonte..." I clicked and then was in crazy land for a few minutes. Truly not touchpad friendly at all, which means I will now make a frowny face.

That said, there was one bug that I discovered that might be browser related. If I clicked, dragged, dropped, or spaced, I could not point at a "point" box without clicking on it first--nothing would happen. I run Mac OSX with Camino.

My game gradually desynched with the audio, which greatly decreased the fun factor. I hope Bonte fixes this issue!

With my tablet, I managed go get the bonus round. It's really hard!

It has no rhythm to it at all, it's just totally random, and gets harder and harder. I might've made it halfway through, but I don't really know to be honest! >_>;

About the bonus round:

I think it'll just get harder and harder without stop. There's not really a reason to have an end if it just gets really hard.

This is one of those things people should be filming their friends/family/co-workers reactions too and posting on youtube ^_^;

Get to it, interwebs peoples!

Just lean on the space bar. As far as I can tell, it doesn't dock you any points, and the auto-repeat kills off those spaces really fast.

Did anyone else burst out laughing at this part?

Oh yeah SonicLover, by the time I got to that part I was leaning off the front of my chair furiously trying to keep up and totally died laughing when that happened. First try 42000... Going back for more!

(Note: I'm not terribly sure if it was the game that made me feel sick. It could have been those Cheerios I had earlier. ;} )

It turns out the problem wasn't my mouse-- I just have bad reflexes.

...I want this tune on my iPod Touch.

wow. I made the bonus round and got a certificate for hard, but i couldn't save it since i don't have facebook.
I got 46075 points

SO CONFUSING AFTER A WHILE. I started to continuously press space because I was tired of pressing it exact in the bonus round

argh! it's impossible to do this game with a trackpad! i must now buy a mouse!