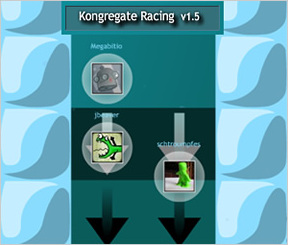 Kongregate Racing is a new game by Jacob Grahn (Game of Disorientation) and created for Kongregate, a relatively new site aimed at players and developers. Although the game is relatively simple in design, it is unusual in that it is one of a small but growing selection of casual games that are firmly designed to be multiplayer.

You begin in a lobby with other online players and a variety of available tracks ranging from "very easy" to "omygosh". To play, simply select an available (white) slot in a track of your choice and click play. You can play alone if you need to practise a track or you can wait for (or join) other players. As you collect more points through winning races, new levels become available and points are saved on your computer even if you quit. Some extra features such as the lobby chat facility are granted to registered users of the site.

The racetracks are generally mazes composed of 2D square blocks whilst your vehicle is an icon in a bubble, controlled with the arrow keys (there is a distinct watery feeling to the background and the physics that makes control more tricky than a simple road-based game). Later levels introduce blocks with different properties such as sticky, spikey, bouncy, breakable and (most annoyingly) invisible. You can slow down the opposition by blocking or bumping them but for maximum satisfaction, bash them into the spiked walls. Occasionally, short cuts and alternative routes are available and this means a bit of solo practice can be time well spent.

Analysis: The graphics appear crude by the standard of many contemporary Flash games exhibiting a lack of detail in the environment whilst the player is represented by nothing more than a static icon. However, this is more than justified by the excellent real-time multiplayer performance which (on my broadband connection) was smooth even with almost every available track being simultaneously raced by players.

The music is certainly appropriate to the game but does get annoying after a while - some variety would be nice for the different levels. The sound effects are also a little disappointing and could be more creative whilst the mute option is unfortunately an all or nothing affair. The lack of option to configure the controls will also make the game more frustrating and less accessible to some.

All in all though, this is a fun little racer with a simple premise but the added depth of being multiplayer. The different levels and the competitive element means that there is enough to keep you coming back for more (whilst writing this review, I find myself going back for "just one more race"). And at the same time, the variety created by the different surface properties and the unpredictability of real opponents means that even the most practiced player can get beaten by a complete rookie.

Oh, man. This is so much fun. It would be nice to have a little course variety within a given difficulty, but the competition and jockeying for position among the other players really makes you come back for one more race.

It doesn't range from very easy to omygosh, if you scroll down you get six more tracks

Is it just me or are those controls really so annoying?
Most of the time it feels like the ball refuses to move when I say so :-(

Uh, this is the most incorrect review I've seen here; there is no 'earn points so you can play more tracks' The only reason why you can't play certain tracks is if it's filled up 100%. If there is a points system, then it gives you all the points you need to play every single track as soon as you start

2,707 Views
10 Comments
chrpa— Jayisgames needs your help to continue providing quality content. Click for details Hi! Weekday Escape and Weekday Puzzle are here! This week we've got two standard escapes, by tomoLaSiDo and by Crayfish/MysteriousBox. The second is much longer with a...  ...

5,836 Views
5 Comments
chrpa— Jayisgames needs your help to continue providing quality content. Click for details Rinnogogo left you astray in a small train station. All alone, you wander around not knowing what to do - you can't leave the station because there isn't...  ...