KrissX ("criss-cross") is a rare and well-polished entry in the downloadable word game category. It's not a spelling game, it's not a word search/scramble game, it's not a guessing game (well, it kinda is); instead KrissX combines a familiar mechanic from matching games with letters and clues, creating something that resembles a mixture of Bejeweled and a crossword puzzle. 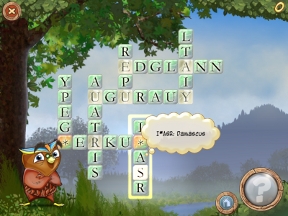 Wordsworth the Owl needs your help! All the letters seem to have been jumbled out of place, turning perfectly ordinary words into unintelligible drivel. Swap letter tiles and move them so that each row and column forms a word. Tiles where lines intersect give you clues to solving each word, and if you're really stuck, hover the cursor over a tile to receive a free clue. The goal is to complete each level using as few swaps as possible. You're not punished for using additional moves, but don't expect your score to be worth writing to grandma about.

The main portion of the game, quest mode, takes you through stage after stage of puzzles, each with increasing difficulty. You earn badges and unlock additional modes and puzzles by hitting milestones in this part of the game. The bulk of the levels display a sparse nest of words in front of you and challenge you to swap tiles until all is right. Sometimes, though, you'll encounter a solid block of letters and must swap tiles vertically so that each row spells a word. There are also single-word stages that challenge you to untangle the puzzle using as few moves as possible.

Here's the real selling point: a custom puzzle editor! After you work your way through around 20 levels in the main game, you earn the ability to create your own puzzles. Add words and clues with a simple menu system and KrissX jumbles everything for you, adding as much or as little difficulty as you like. Puzzles can even be shared with other players, which is an extremely cool addition to an already captivating game! 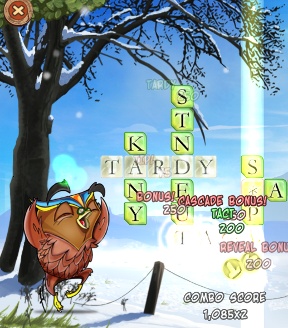 Analysis: It's rare to see a word game make its way to the downloadable platform. It's even less likely that word game will be highly-polished, well-rounded, and interesting enough to warrant your attention. KrissX is all of that and a spoonful more, as it doesn't skimp on the visual side of things and delivers a surprising amount of gameplay for such a simple concept.

Your first impression of KrissX might leave you worried about the game's overall difficulty. The first dozen or so stages are easier than finding an apple pie at a bake sale. It isn't until you unlock some of the game's extra modes that you discover there's actual challenge to be had, though even then you probably won't strain a synapse. To bump up the difficulty, simply turn off the hints in the options menu. Then it's all anagrams, all the time.

One of the game's strongest points is the replay value. Quest mode comes with 150 levels, which isn't anything to turn your nose at. Each time you play, however, the stages will be different, as the game jumbles letters in a new way every time. Add to that the custom level editor and you're looking at a ton of word puzzles that will keep you busy for ages. Especially if you've got a word-obsessed friend you can swap challenging levels with!

KrissX is a surprisingly full-featured word game. With a marvelous visual presentation, a simple concept, and loads of customization and replay value, it's easy to sit down and have a good time with this game!

Nice and soft and polite and sweet