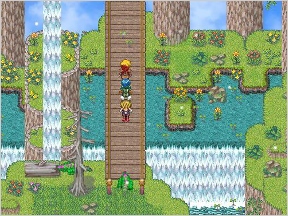 Laxius Force is largely linear in nature, though like any RPG there are numerous side quests and optional adventures you can embark upon to earn extra items, experience, and gold. Or you can head out just for the fun of exploration! Battles are turn-based and take place from your party's point of view. Use the menu system to choose actions, then sit back and watch the fighting ensue. Random battles are mostly absent from Laxius Force, as you can usually see enemies before you engage them. There are some areas where your foes can hide, however, so don't be too surprised if you're forced into a fight here and there. Besides, what's an RPG without combat?!

Once you get a few characters together you'll need to do some party management to keep things flowing smoothly. Each character has his or her own set of skills on the field of battle, so forming a party requires a bit of thinking. Only active members gain experience from combat, so be sure to switch people out from time to time so no one falls too far behind.

Analysis: I'll have to admit it right from the start: part of the reason I enjoy Laxius Force is due to my love of Super Nintendo-era RPGs. The tiled graphics, the slightly cheesy plots, the menu-based combat and the raw challenge of felling massive foes are a part of my blood. That being said, Laxius Force does a great job of evoking that mid-90s feeling without bringing back the pitfalls that haunt me to this day (level grinding, cheap enemies, etc.). It's new age retro, if you will, and I really couldn't ask for more than that. 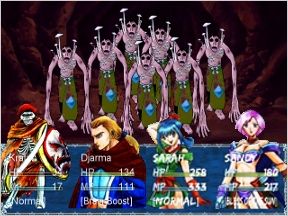 In terms of challenge, Laxius Force hits the middle of the mark. Cheap deaths aren't too much of a problem, though you'll have to do some light leveling and/or smart battling in order to survive early portions of the game. Bosses can be tricky and won't simply fall to your blind attacks, forcing you to watch, learn, and adapt your strategy with each one.

Laxius Force isn't without its flaws, however, and if your vision isn't clouded by those rose-tinted glasses of nostalgia, they may stand out more than you would like. A big part of any role playing game is the dialogue. You spend a lot of time talking to characters and reading text boxes, so naturally having a skilled pen behind the scenes is an important facet. While the story and characters are interesting in Laxius Force, the developer's native tongue isn't English, and this shows through in the occasional awkward paragraph or slightly confusing sentence structure. Nothing you can't overlook, of course, but it does detract from the experience a bit.

One curious exclusion from the game is the lack of a way to flee from combat. If you can't avoid an enemy outright, you're forced to fight, so you'd better be ready to win. If your party is defeated you'll restart from the last town or dungeon entrance at the price of 10% of your gold. Not too bad, considering how most role playing games simply reload your last save.

Fans of other indie RPGs such as the Aveyond series will feel right at home in Laxius Force. Keep in mind, however, that these games aren't aimed at a casual audience, per se, though their pick-up-and-play value is still quite strong.

A good looking, lengthy (30 or so hours of gameplay) and delightfully retro role playing game that will please just about any RPG buff out there. There are some minor quirks in the dialogue and battle system, but otherwise it's smooth adventuring.

Laxius Force is available to download from these affiliates:

I was kind of interested until I scrolled to that screenshot of the battle. Yikes. I understand that gameplay can make up for graphics, but I'm not sure if I'd want it even if it was free.

From the screenshot, I seen much similarity with RPG Maker software.

This is clearly an RPGMaker game. The tilesets, monster graphics, and battle system are exactly what the program provides you with.

Yeah, it's an RPGMaker game. But it might actually be a good one of them ;o

He, and here I thought I was the only one who immediately thought RPG Maker at the sight of this.

Never the less, this actually looks like a good game. And it definitely is possible to create good games with RPG Maker, like Eternal Eden. So I'll give this a shot.

That's a common RMXP game with mostly standard chipsets.
There are so many other, so many better games made with RPGmaker 2000 (RM2K).

I dabbled with RPG Maker XP a while back and wanted to mention that you can use the default keys X and C to control the game, if you don't like using Enter and Escape.

Here are some thoughts...

Plotwise, the game simply drops you into the action with little set-up. Some people prefer this I suppose, but I would prefer some more interesting backstory. It feels like the game forces you to explore "dungeon #1" without giving me any desire to do so.

There were lots of nice touches, adding bits of functionality in creative ways, e.g.

The story picks up after dungeon #1...it does get more interesting, and it does feel very freeform - you can wander in any direction, even into areas that might be a little tough at early levels.

There is a spot where you can *die* and get sent to a GAME OVER screen:

There's a gate in the pyramid which, if you open it, and go through, will present you with a ridiculously powerful enemy that will kill you.

Someone mentioned Eternal Eden in the comments above; I second it. Yeah, the majority of the graphics in Eternal Eden is straight from RPG Maker, but it is an excellent game. I hope this site will review it soon to give it some more popularity.

The original graphics in Laxius Force...could be a little more refined...the battle screenshot is aesthetically assaulting my eyes.

One thing you didn't mention in the review is that it's aimed at a more adult audience... There are scenes where you're given options like "Bare Breasts" to avoid being eaten by cannibals

If I were you... try DEADLY SINS... another great RPG... anyways... yeah laxius force is a great game.. thumbs up to those created this..

If you enjoy old school RPGs, tons of sidequests and a great story, then laxius force is for you.

It continues the epic story from the previous laxius power trilogy. (all of which are free) I played the LP before LF and i have to say that the development of the story and the multitude of quests are what will keep you hooked on the game.

the only con i could think of is the sometimes quirky dialouge.

I love Laxius Force and have been playing it for weeks now. I've started and restarted it over and over. I keep getting stuck, lol. What I want to know is how in the heck are you supposed to finish the side quests, when you can't get the items you need until you go to different towns or screens and then you can't go back to where the items are needed? Such as, I finally found where the Thieves Guild is and completed most of their quests. But, I had to go to Adretna to get the garden key to open the chest in the Thieves Guild. However, I can't go to Mt. Tulle to get back to the Guild to open it. I wasn't able to buy the pheasant's hat in the Thieves Guild, in order to persuade the man in the palace to help in another quest, either. I am stuck, lmao. Anyone have any ideas? On the whole, I highly recommend this game for days and weeks of fun. It really makes you think and it's very addictive.

4,824 Views
0 Comments
chrpa— Jayisgames needs your help to continue providing quality content. Click for details Welcome to the Roundup 39 with three games! As mentioned in the previous roundups, only odd-numbered episodes are featured since even-numbered are for Robin Vencel's patrons. More...  ...

415 Views
0 Comments
jayisgames.com— 2021 first-person shooter (FPS) games might have made you grapple around, swipe high-tech vehicles or fight challenging bosses. They might also have trapped you in a never-ending loop and immersed you with gory survival from zombies and other creatures. You...  ...

1,899 Views
2 Comments
chrpa— Jayisgames needs your help to continue providing quality content. Click for details Hi, it's Wednesday! The Weekday Escape has arrived! With Amajeto you try to escape their apartment where you need to collect eight tiles. The second comes lovely...  ...