Despite all my rage I am still just a ball in a maze!... hmm. That tune needs work, but the experience is just fine in Pipkin Games' Layer Maze 4, the latest in a series of maze-like puzzlers. All you want to do is get to the exit at the end of each level by using your [arrow] keys to navigate. Simple!... except that to pass through coloured doors, you have to have rolled through the matching paint first. And you need to get the appropriately coloured key. And you have to use the [A] and [Z] keys to hop up and down through holes in one layer to explore the next. Hmm... this might be trickier than I thought. 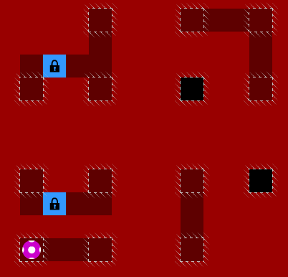 Layer Maze 4 is sort of an amalgamation of all the other games in the series, and is better for it. The first game just had you swap between layers, the second game added keys and locks, and the third game incorporated optional stars that applied a bonus to your end-game score, which was based on your time. As a result, Layer Maze 4 feels like the most satisfyingly complete game, with more than just one or two twists to its simple formula... though also possibly the one with the steepest difficulty curve after the first few levels. Since you can have more than just two layers to a level, remembering where all the keys, doors, paints, and paths are requires a lot of mental juggling. It's a concept that won't appeal to everyone, especially if you don't like having your brain tied up in knots. If it tickles your fancy, however, you'll find Layer Maze 4 to be a simple yet devious concept elegantly executed to give your mind a workout... and then some.