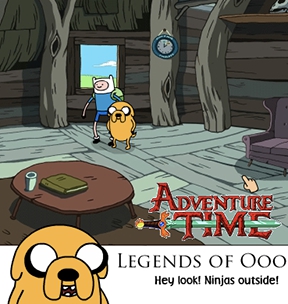 Are you ready for a point-and-click adventure that's totally algebraic? If you're wondering what algebra has to do with anything, clearly you're unfamiliar with the hit Cartoon Network series Adventure Time. The show features plucky protagonists Jake (the dog) and Finn (the human), the surreal, magical, post-apocalyptic Land of Ooo in which they live, and (most importantly for this game) recurrent villain the Ice King. The Ice King kind of has an obsession with marrying a princess. Any princess. Any at all. So he freezes Hot Dog Princess, Slime Princess, and Princess Bubblegum, and it's up to Finn and Jake (and your cursor) to rescue them in Legends of Ooo. Mathematical!

Point around with your mouse. If you hover over something you can pick up, the cursor will become a hand. If it's something you can look at, your cursor will become a magnifying glass. If it's someone you can talk to, it'll be a speech bubble. And lastly, exits turn your cursor into a door. You have to actually drag items from your inventory where you want to use them, and there's no item combining. This is a pretty simple game aimed at children, so you have an in-game hint system and you can pick up more hints by getting snails. The in-game hints are implemented very well, actually: they start out subtle and then get more explicit, so if you just want a nudge, they're great for that.

While the game may be geared towards kids, it was adults who made the original short a viral hit and who drive much of the fanbase even now, and they won't be disappointed by this game, which features a lot of sly humor that will go over children's heads, without compromising the appropriateness level. It's surprisingly long, too, so when you consider that the episodes of the real show are only about eleven minutes, this is like a bonus episode. The game doesn't require any knowledge of the show to complete, since the character's dialogue provides all the clues. Adventure Time fans shouldn't miss this one, and non-fans might become fans by the end of it.

The walkthrough will not mention snail locations as they are not necessary to complete the game. You can pick them up when you see them if you like.

It loaded, but I'm not sure it's working. Nothing I click on is doing anything.

Nevermind, I closed it and reloaded ... now it's working.

The walkthrough will not mention snail locations as they are not necessary to complete the game. You can pick them up when you see them if you like.

i talked to the hot dogs but i didn't get the sticks.

YES! ADVENTURE TIME GAME! =D And what type of game is it?.. ADVENTURE TYPE!

Seriously, I love the cartoon. The game was too easy and short, though.

actually i figured it out joye. what you had in the walkthrough was

Exit right and talk to the elephant.

Exit right and talk to the hot dogs and get the sticks.

Exit left and give the elephant the sticks and the wool and get the scarf.

With Jake the dog and Finn the human - the fun times never end...

I missing the Tummy Ache badge but beside that I completed the game.

Ton of references...But the review made it sound better then it really is. If you don't like simple flash games (like most of the stuff on Cartoon Network) then you will most likely live without playing this game.

It is worth noting that Cartoon Network games are never "official" in terms of the shows. So the layout of some places may not be true to the show. I recall an Ed, Edd and Eddy game showing that Edd only have 3 hairs. So don't use this game as a source if you doing some fan art.

Sorry about that Paul! I didn't realize that the linearity in that part of the game was so constraining. I'll fix the WT to reflect it right away. Also, I'll be adding in the mystery badge.

[I just tried in Firefox and Chrome (Mac OS) and the loading bar shows complete for a few seconds, then switches to the Cartoon Network logo before showing the game's main menu. Have you tried using a different browser? -Jay]

Having the same problem as Tim - loading bar displays as full and then stays there. Have tried Firefox, Safari, Chrome...nothing works