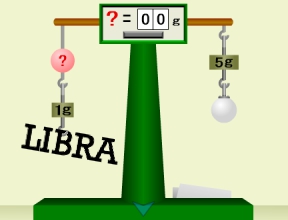 Libra (September 23rd through October 22nd): Your ruling planet is Venus. You desire a consistent life with few complications, and your childhood dream is to meet the boy or girl of your dreams, although failure to meet this goal can lead to a fairly independent life which can make you successful in business. Today you are likely to play an escape game by Otousan, maker of Bird Escape, with puzzles themed around determining the weight of objects by various means.

As is the custom with Otousan's games, Libra places you in a four-walled room with various features. Click around the screen with the mouse to navigate and interact, sometimes picking up objects that are appropriately useful. Select or deselect an item in your inventory by clicking it; when selected, use it by clicking on the environment, or inspect it with the "About Item" button. When Otousan picks a theme, they play with it in seemingly every way they can; Libra is no exception. It has all the hallmarks of an Otougame: a group of well-designed themed puzzles with some simple minor ones to tie them together, a simplistic atmosphere that makes sure you know what you're messing with without being distracting, a changing cursor, and unfortunately no save feature. Being a Gemini myself, I guess I'll have to wait a bit longer to find an escape game themed around my sign. For now...

Never quite figured out the "right" way to calculate the mass of the final object. Visual approximation along with trial and error wasn't a particularly satisfying way to end.

Yes, based on the simple scale, you can almost tell it's around twice as heavy as the 25 (or the 25 plus the 5), but punching in every guess between 45 and 65 doesn't sound like the right approach. There's got to be a real solution I missed, right?

As to the final weight...

I liked this game a lot! It reminded me of science class back in the day. So many little weights, so much measuring... I think my teacher would be proud that I solved the last puzzle by remembering

things on the moon weigh 1/6 what they do on earth.

Figure out how much 1 mark on the scale equals. You do this by applying a combination of weights until you are pointing directly at one of the marks and then divide by the number that you are pointing at. For example 5+1 = 2nd mark therefore each mark is (5+1)/2 = 3 grams. You then weigh the question mark, add up the marks and multiply by 3

but I don't know if it's different each game and I just had an easy one!

Easy solution for the last puzzle:

weigh the question mark (4 hash marks) then weigh the 1 and 5 kg together (2 hash marks)..multiply by two and you're done

Hey, I think this is the first escape game I solved without even glancing at the walkthrough. And why? Well, partly because I got the hang of the main gimmick pretty quickly, but also, no pixel hunts! The number of times I've been stuck on an escape game because I know what to do, but can't find the thing I need to do it.

for me the answer to final problem was

the answer to the ultimate question of life, the universe and everything

Gee, apparently my trouble with the final puzzle being "unsatisfying" was due to a hidden hotspot.

I had no idea you could zoom in on the spring scale a second time. The first level of zoom was close enough to see the red measurement line, but the identically sized hashmarks are apparently utterly hidden until you click on it a second time.

The best room escaper I played in a long while.

my mind immediately went into trivia mode: "we are on the moon, and moon gravity is about 1/6th of earth's"

Is it just me or is the second scale impossible? I've used every combination of 1 and 5 gram weights and nothing's happened!

Loved it!!! First one i've done with no walkthrough. Love the math, but also liked not having to pixel hunt.

the hook with the ball is still an open spot. Dont forget to use that one as well.

How are you breathing in space?

I'm using Google Chrome and the game is slightly larger than the square it's nested in, which meant I could only navigate around the room by going left and I barely had a sliver of the X to close the close-up of items.

The last time I had that problem, the zoom in the browser had been changed from 100%, but that wasn't the case this time. Indeed, changing the zoom didn't affect the problem one way or another for this game.

Good game despite the technical issue, though.

Interesting...I am using Google Chrome and I did not have that problem. Everything was perfect in my browser.

nice little game for a work break. I can't wait to get home and attack the new Hotel scape. It won't be so simple I hope/dreas

Wow, SonicLover, your horoscope was almost dead on! The only thing you got wrong was my astrological sign.

I died when I opened the door as all the air was sucked out of the room because I was on the MOON! :P

set it up as equivalent ratios:

This was nice, but a little too easy. It only just got my interest when

the ship(!) launched and landed at the moon,

but by then the game was practically over. If a game can be said to be part of a meal of meat and potatoes, this one was a pea. A very nice pea indeed, shiny and green and with a surprising yet satisfying aftertaste that tickles the tongue after a bit of chewing, which is not all that common for a pea, I'll give it that, but it's still just a pea. Well, maybe a bit of potato too. Not much sauce though, if any, and definitely no meat. Perhaps the meat's visible through the binoculars, but it's out of reach. (In hindsight, this is perhaps not too surprising, considering where we ended up.)

This game needs a bit of quality control on the weight values. Some of the (I assume) randomly generated weight puzzles are impossible to balance. In my case the weight on the 3rd weight puzzle was 16 on the inner side of the scale. The closest you could get to balancing this was
putting the 5g weight on the outer left side of the scale and the 25g weight on the left. Adding the 1g weight to the outside right of the scale caused it to tip the other way. (Strictly speaking this means the unknown weight was more than 15g and less than 17g). Otherwise seems nicely done id a bit too easy.