Lilith and Emma: A Friend at Hallows Eve 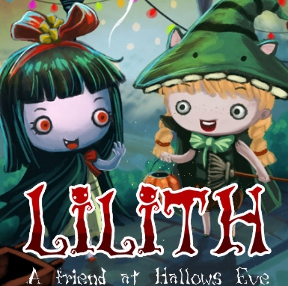 Just because Halloween is around the corner doesn't mean you have to submerge yourself in guts and grossness. Lilith: A Friend at Hallows Eve and its sister title Emma: A Friend at Hallows Eve are two spot-the-difference titles from Difference Games that inject a little sugary sweetness into an otherwise spooky season. Emma and Lilith are just two little girls who want to have fun on Halloween. Emma is an ordinary kid with an awesome hat. Lilith is... a bit different. Both games are played simply by finding and clicking the differences that appear between the two pictures you're shown for each scene. When you find them all, you move on. If you get stuck, you can click on "shake" or "reveal" at the bottom of the screen when available for a hint. 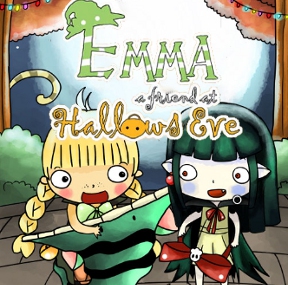 While not the deepest experience out there, A Friend at Hallows Eve is the sort of light and simple snack that seems designed solely to put a smile on your face. It's definitely not targeted at older gamers specifically, or people whose sole goal in games is an experience that ends with them firing a gun off into the air while going "arrr!". Instead, it's just a well made, silly, and absurdly cute little experience that will teach children a valuable lesson; mummies are not to be trusted, but vampires are okay, as long as they're not quoting tortured metaphors and poetry at you. The two art styles are vastly different, one being more heavily stylized and the other more reminiscent of a children's book, but are both perfectly suited to the games.

The only real issue, aside from the length, is the fact that past a certain point the stories are identical. Yes, okay, so you're basically just telling the same story from different perspectives, but it makes playing the last half of one game a little dull when you've already played the other. A few extra pages detailing some sort of different ending for each girl would have fleshed both out nicely. Still, both games are well drawn, sweet, and about as adorable as you can get with some sort of permit. So grab your favourite little monster, pull them on your lap, and have them play along. If you don't have kids, of course, feel free to put your nose in the air and sneer that you don't play baby games, and then click both links when you think our backs are turned. It's okay. We won't tell anyone.

I liked that the endings were so similar.
Emma's view is more "cutesy" than Lilith's, which was interesting.
I played Lilith THEN Emma.

Seriously, this particular bite-size pair of games is excellent for a brief pause when your brain feels like it's going to explode from work or trying to get your Hallowe'en candy organized. I've always enjoyed the "Spot the Difference" games here on JiG, and this one is just as enjoyable as any others.

The difference in art style and music makes the two companion stories fun to examine, especially if you're comparing the differences between not only the panels, but between the two stories as well. For the subject matter, I think that this is an excellent pair, and if you have littles who like to play along with you, they will enjoy this pair.

I guess in Emma's perspective, Lilith is just a sweet little girl. But when you look through Lilith's glasses she sees Emma as vulnerable and so takes advantage of her innocence.

I liked Lilith's version better. It looked more detailed than emma's version to me. But either way it was a really cute game!!!!!

One of the easier spot-the-difference games, but I died from the adorableness. For the first time in my life I felt the longing to be a little girl during Halloween. It was enlightening, albeit somewhat disorienting.