Well, we've got some good news and some bad news. The opposite of the non-good news first: so many promising games hiding just below the horizon! Also, so many cool things going on for gamers to enjoy! The not-opposite of the non-good news: mobile companies are still ripping off small indie dev by stealing their ideas. Chocolate and cookies can't made the sadness that news brings us go away. But... it can help! 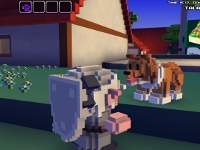 Get Excited: Cubes are Everywhere A few building games you should keep an eye on in the coming months. First up: Castle Story, a game that looks to combine elements from Dwarf Fortress and Minecraft into a great-looking simulation sort of game. Start with a few Bricktrons and help them stockpile resources and build castles to defend themselves from the bad guys. No release date has been announced, but it's never too early to start salivating. Next up is Cube World, a game that may look like Minecraft but is actually more of an open world RPG with heavy sim elements. The latest bit of news is the addition of pets (yay!) and two new mobs, including frogs and moles! No release info for Cube World either, but, again, happy happy joy joy! 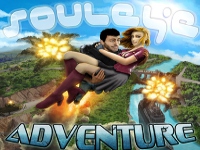 New album from VVVVVV Composer Souleye If you enjoyed the music of VVVVVV as much as we did, you'll be psyched to hear that the composer has just released a new album, Adventure, that includes all-new material alongside remixes from the VVVVVV score. It's 20 tracks of chiptune-sounding goodness, and it'll probably make you want to go on an adventure yourself! 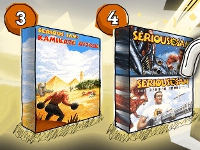 A Serious Bundle While we're still pretty burned out on indie game bundles, the thriving masses of players who love them are still out there, and bundle bundlers are hard at work bundling more bundles for everyone to enjoy! This time around, the Indie Royale folks have packed together a bunch of Serious Sam games (including a few by indie developers) for the low price of "whatever you wanna pay". The games represent a wide variety of genres, from RPG to shooter to Canabalt-style running game. This also sets off the site's series of lightning bundles that will be on sale for around 100 hours and promote niche titles. So, if you want 'em, get 'em fast! 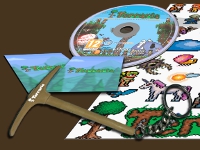 Terraria Collector's Edition Box Announced Here's a little something for collectors and everyone who enjoys real, physical objects. Terraria Collector's Edition has been announced for a March 16 release in the UK. For just under £20, you get a physical copy of Terraria, a poster, trading cards, a key ring, and an exclusive in-game item. No word on a North American release, but having a handsome product like that on your shelf certainly seems appealing! 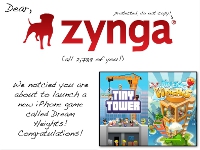 Return of the Attack of the Clone Wars Familiar with the wonderful NimbleBit game Tiny Tower? Most people are, it was only named as iPhone Game of the Year 2011 by Apple. Well, it looks like the clone-master folks at Zynga have decided to take the Tiny Tower concept, put some new visuals on it, and release it as their own game called Dream Heights. Not only does this game copy the exact layout and structure of Tiny Tower, it also comes months after the company attempted to buy out NimbleBit studios but was turned down. In other words, if you won't let us buy you, we'll use our superior resources to take your game anyway. Not cool, Zynga. Not cool. Check out NimbleBit's response, which is both informative and snarky, then read our previous article Cloned Mobile Games Hurt Indie Developers.

I miss the old Link Dump Fridays.
Why can't we have the good old collections of web games, instead of these news announcements?

[Because, as we've stated before, these games now get their own write-ups or mini-blurbs throughout the week. We know some people miss the old format, but we won't be going back. Remember, if you just want the games you can always check on our RSS feed or our portal page. :) -Dora]

I just went through every single zynga game on the iStore, and rated it zero.
Because procrastination is much more fun when I can say it's for a good cause ^.^

Ha! A noble hobby, crashlanding. :-P I did notice people have harpooned the game on iTunes, and currently it has a 2-star rating.

Yeah, and before you know it Zynga starts to throw lawsuits at whoever dares to copy their game!! And ofcourse Zynga fully supports SOPA!