Dear Readers. How are you? We are fine. Jay told us we had to write these letters so you wouldn't suspect we are kept in little reviewer cages suggested we write to you telling you how happy we are to write for you. Each day we are fed a nutritious algae slurry through a water bottle allowed out to frolic in a sunlit glade with all the other reviewers and are absolutely not kept in line with the threat of being forced to wear itchy, humiliating sweaters whatsoever. After we finish our duties, such as this article, which we attend to willingly and with relish, we are forced to rub Jay's feet given reassuring cuddles while Jay coos to us about how very special we are and serves us hot cocoa before storytime. Send help. Design Meets Marshmallow Chickens Do you know what's lovely? A nice clean set of aesthetics. Not necessarily just "pretty art", but a game that looks all around smooth, polished, and well thought out no matter what sort of style it's going for. That's what makes Play Peep so great; it's a Tumblr dedicated to showcasing some of the best design and style in all sorts of games, from browser to iOS. Play Peep just presents these images and screencaps (and even icons) without much commentary, but it's still a great way to get you thinking about why these games look and feel so amazing, and should provide some great inspiration too. 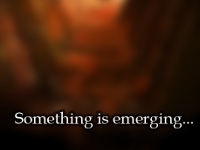 No Giggling at THESE Ghosties Amnesia: The Dark Descent was a terrifying game. Frictional Games effortlessly created an environment of absolute tension and terror that stuck with you long after you turned off the game.(As well as leading to one of the most hysterical user created gameplay videos I've ever seen but can't link to for all the genuine shrieking of profanity.) Well, surprise, fear lovers! Next Frictional Game is a website that popped up this week and should get your heart pitty-patting even if it's just a teaser right now. Adventurous or otherwise clever souls will find scant extra information other than the image and the map linked by it, but you can peek at the page source to get a little more clue as to what's going on. Are you excited? You'd better be! 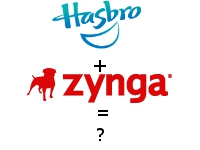 ... Sittin' In A Tree, K-I-S-S-I-N-G... If you're a big Facebook gamer, then you probably know Zynga as the people behind various 'Villes and Wars. If you like brightly coloured cartoon equines, then you probably know Hasbro as part of the driving force behind another particular 'Ville, amoung other things. On February 9th, Zynga announced it had gone into partnership with Hasbro, which is of course no guarantee you're going to see My Little PonyVille or Pony Wars, but should still pique your interest. Personally, I'm for whatever goes with less Farmville Bucks stickers showing up on my heads of cauliflower when I'm shopping for curry ingredients. Director's Cut, But With Pixels Nitrome has a pretty big fan following, which is sort of like saying tidal waves are sort of damp, but this fan-made extended version of Skywire VIP is still pretty remarkable. The game by Max Schramp and Duncan Smith, playable here and made with Scratch, has a ton of levels packed full of more adorable itty-bitty visual trivia that's a faithful recreation of the original game. Perhaps even more remarkable, however, is that Nitrome has approached these talented fans to combine their talents and work on making it a full release on Nitrome's official site. Now that's teamwork... and some impressive affection on both sides! Keep your eyes peeled for this one. 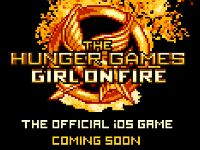 Feast on This Hurray for Adam Atomic! Hurray for Daniel Baranowsky, Kevin Coulton, Mark Johns, Kert Gartner, Paul Veer, and Ozone Sound & Music! Hurray for depressing dystopian futures! Why? Because this indie team of crazy talent has been tagged by Lionsgate Studios to create the official iOS game tie-in for the Hunger Games movie, which opens March 23rd. If you've read and enjoyed the original trilogy by Suzanne Collins, then this is great news, but it's also great news if you just like awesome indie talent getting rightfully noticed. Check out the blog entry to learn more! 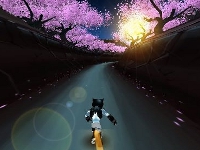 Dreeeeeeeam WEAVAH! If you love jump-and-run games like Canabalt but find them a little mindless and light in the story department, developers we.R.play have heard your cries and are about to answer them like some great... avenging... game... company... thing! Dreamrunner, coming soon to your iOS (iPad, iPod Touch, iPhone 3GS and above) blends story with beautiful action as you play a night-spirit named Nitro tasked by the God of Dreams to chase down all the dreams scattered throughout the realms after the god's tower crumbles. The game's surreal, achingly lovely design combined with that gloriously speedy action makes it look like a perfect fit for iOS, so stay tuned for this one, and in the meantime check out the official site for more screenshots, a trailer, and artwork! 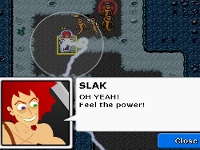 Productivity is Overrated Apart from a few bug-fixes, Level Up Labs' indie tower-defense RPG time-destroying dynamo Defender's Quest hasn't really had any major updates. I just wanted to tell you that you should try the demo and then buy it if you hadn't already. Because I sat down at the computer today meaning to get some writing done and somehow wound up playing this, again, for several hours. And by the Nine Divines, if my free time has to go out the window whenever my eye falls upon this icon on my desktop, so too must yours. (Seriously, check it out.)

I brought my computer to bed with me just to play some more Defender's Quest! HA! LDF has become my favorite post of the week...love it, and great job, Dora.

I will be watching for the Hunger Games...er...game. Hope it will be playable on older iPods, but I won't hold my breath. It might be time to upgrade. At any rate, this all sounds like good stuff!

What a treasure you are to this site - every time I see your name at the top of a post, I know I'm in for a treat.

Do you have other written work off-site? You've got such a gift with language!

As a gamer, I want the video game ecosystem to be a healthy one. Zynga is an illness.

Did they manage to combine games people enjoy with a way to make them more social & profitable? Yes.

Did they do it by ripping off other games in look, feel and mechanics? Yes.

Did they do it by ethically-unsound practices, including violating the privacy of all their users? Yes.

Do I wish gaming sites would stop covering Zynga in anything more than a strictly negative way? YES.

The new Skywire expansion thing looks promising. I loved the old one, so I'll keep an eye out for it.

I'm at a bit of a loss at the Skywire game. It asks "Who am I?" to which I answer all kinds of things, which just causes the dialog box to pop up again. And Flash is enabled and updated. What the?

*squints at the Skywire VIP screenshot*
Is that... the Cat in the Hat? Dr. Seuss?

Yeah, color me very NOT pleased at the idea of Zynga getting their heavily soiled mitts on the MLP:FiM license.