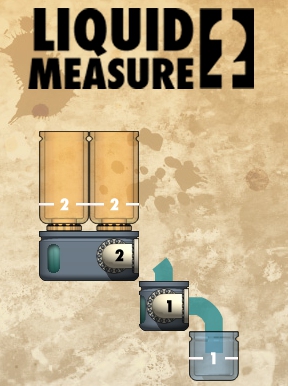 Liquid Measure 2, the second in the series of puzzle games by SmartCodeGames, is one of those unique presentations that can only be described with a cocktail recipe: Take one gallon of Pipe Mania, swirl it around with a quart of those brain teasers where you have to collect four gallons of water (but only have three and five gallon jugs on hand), and stir in a couple tablespoons of simple idea physics. You'll end up with a punch-bowl full of Liquid Measure 2. And altogether, it's quite a tasty drink.

The goal of the game is to direct flows of water into the proper receptacles without letting any go to waste. As you might expect, the water generally flows downwards unless directed by other implements. Using your mouse, you drag and drop the various items to set up the proper aquatic route. In addition to the standard pipes and pots, there are other pieces available for use, including Overflow Pots, which catch a certain amount of water before releasing the extra, and Water Splitters, which splits the stream into two equal streams starting with the direction the arrow upon it is facing. You click the pipe on the right side of the screen, or hit the [spacebar], to turn the water on and see if you've successfully gone with the flow, or have just ended up all wet.

The presentation of Liquid Measure 2 is quite professional, but while the new items should be of interest to those who've played the first game in the series, overall most puzzlers won't find it all that much of a challenge. It felt like a good third of the game's thirty levels was a tutorial, and only a handful of puzzles required significant thought, all clustered at the end. While the interface is easy to understand, the graphics lean to the sterile side: the water doesn't feel nearly splashy enough, and resembles more a streak of blue marker than a waterfall. I doubt that adding such effects would've been worth the trade-off in game processing speed, but it took me out of the experience a bit. While the dripping and draining sound-effects are quite a nice touch, after a while they create an effect akin to placing the player's hand in a bowl of warm water.

Despite these quibbles, Liquid Measure 2 is a game with clever puzzle mechanics and a solid aesthetic that will keep you occupied for a good half hour. If you don't mind an overly easy level of challenge, Liquid Measure 2 makes for a satisfying dip in the flash waterhole.

UPDATE: A new Level Pack has been released!

Fantastic game, really gets you thinking!

That game was fun, but it was a bit easy. Beat it in under half an hour.

I wish the music wouldn't stop then restart every time I beat a level. I've heard the first 10 seconds of the song too many times.

A nice, interesting set of puzzle mechanics! I'd be happy to see a few more gimmicks introduced if there was another sequel, but what's here is pretty fun!

Was playing this on another computer and think I honestly got stuck around level 21.. let's give it another go.

It's a good game, not too hard but just puzzling enough.

You pretty much have to throw out your understanding of water physics in order to play later levels of this game.

Water will fall through pipes.

also, water spilled from a container won't spill into a bigger container beneath it.

Yes, this is an inarguably stupid game. How am I supposed to solve math/physics problems if there's no basic respect for three-dimensional objects? Honestly that is outrageous game design and absolutely absurd. And a little infuriating.

I think you'll be wasting your time, looking for scientific explanations of a flash game. Despite the name and appearance, the game works more with math than hydro-based sciences. You have to ignore the idea that you're working with water, and think more about how much of what you need to get into where. You're going about it all wrong if you're trying to think of the objects shown in the game realistically. They're just there to represent something real, not to actually work the way they would in real life.

I'm stuck on puzzle 22 at the moment. No matter how I think about it, I'll end up wasting some water...

I agree, 25 tutorial levels is a bit overdone for a 6 level puzzle game. This concept deserves better execution! Hand me a level editor and I show you puzzles!

I like the concept here, but the puzzle design needs work. I'd say about half of the levels can be solved without using all of the available parts. In general things are too easy, especially when there are lots of overflow pots and relatively few receptacles. The water splitters make things interesting and have a lot of potential for good puzzles, but they don't get used much.

• Forked pipes that merge two streams together
• An output component that creates a certain volume of water once it's triggered-say, by running more water past some part of it.
• Overflow pot-analogues that let their entire contents pour out once they're full. (Best if locked in place, or if involved in a water splitter puzzle.)
• Painting components that dye the water that passes through them, with some of the receptacles needing particular mixes of colors

You don't need to use any of the pipes.

And finished... That was great fun :)

I agree with Buttons. Great for a few minutes of fun, but the puzzles weren't exactly puzzling.

I like that there was more than one way top solve levels.

For a game made up fluid based puzzles, the fluid acts in a stiff way, as if on a predetermined path rather than acting like fluid.

The water moves waaay to slow. The fun was solving the splitting and combining, not waiting 5 minutes to see if I got it right. Also, having the water level continue rising after the water falling from above had fully flowed into jar shows lack of attention to detail.

Could somebody help me with level 21 ?

Can someone help me with level 25?

It is a game for heavens sake, not some engineering students final. This made me smile out loud. FUN!

Stuck on level 5 can anybody help?