Little Alchemist, how does your garden grow? With ace chinchilla jet pilots, sea horses, headless horsemen and armored flying dragons all in a row! And it's a good thing too, because you'll have to master the elements and combine them to form cards like these and then some if you want to save Little Town from the villains in Chinzilla Games' action-packed free role-playing card game for Android and iOS! Collect cards, research new and better combinations to get the most out of your cards, explore Little Town and duel the bad guys for a chance to get new cards, or battle your friends and rivals in the online arena to improve your ranking on the leaderboard... because who among us hasn't wanted to become internet famous for siccing a Skeletal Dragon on unsuspecting strangers? Combine cards like Metal, Rainbows, ever-present Chinchillas and Sunshine to make Final Form cards like Bionic Chinchillas, Thor, and even Puff the Magic Dragon. Coming back each day will increase the gold bounty in the versus matches, so there's no time like the present to start trouncing the general public for utterly obscene heaps of gold rescuing the people of Little Town from wrongdoers everywhere! You'll start out in your study with plenty of options like Research, Edit Deck, the multi-player online Arena, a Shoppe with thankfully completely optional in-app purchases, and a portal to the Adventure map. Each map area has several baddies you can defeat multiple times for a random treasure including gold or a free card. You'll take turns throwing cards from your decks at each other, each with a given Attack and Defense rating, or you can combine certain cards into even more potent cards with better stats. As you form combinations you'll accrue up to five Combo Spheres each of which can boost the stats of many of the cards you can play. Best your enemies to reap the rewards, and best all of them in an area to unlock the next map area. 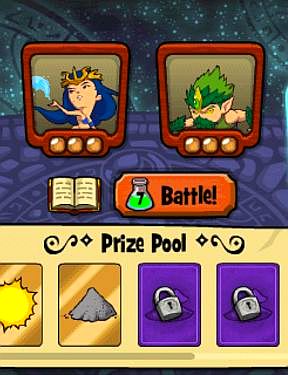 When you're not battling you can withdraw to your Alchemy Lab to research new card combinations to help you in battle. Pick two cards and if there's a possible combination you can research it which takes between an hour and a day depending on the strength of the resulting card. At the Shoppe you can purchase Gems (with offline money) to decrease your Research timers, open new Research stations that allow you to research multiple Combos at once, or buy special card booster packs with guaranteed Rare and Ultra-Rare cards in them. You can still get by without spending a thing, as you'll still open packs with Rares and Ultra-Rares occasionally just by spending mere in-game gold, but the big distinction between playing for free and lobbing huge sums of money at the game will be in the waiting around for your Research efforts to complete. The disappointment when games deliberately hold the gameplay value for ransom like this is offset because there's still plenty of value present and since Chinzilla hasn't eclipsed the fun by making spending offline money absolutely necessary. Every so often, Online Events happen which turn your Adventure Portal into an Event Portal where for a few days new enemies are made available, and you dueling them is the only way to earn the coveted Diamond Cards which are stronger than even the Ultra-Rares. With 300 spells to collect — and counting! — and 350 card combinations to make, Little Alchemist is full of imagination and whimsy, and can brighten your days with Sunshine and Rainbow cards for a long time to come!

This was interesting for a while, and I admit that "explore combinations to find new things" is a particularly addictive kind of gameplay for me. Unfortunately, the actual battles, I found boring and repetitive. There's not a lot of strategy involved, since you don't know what your opponent might play. ("Should I go with the high-attack, low-defense option, or the low-attack, high-defense? Wait, I have no way of knowing. Never mind.") That reduced the game to an awful lot of tap-tap-tap-tap without much thought to it. Which is a shame, because the aesthetics and the between-battle parts could have kept me playing for much longer.