Little Luca from Glowingpine Studios is a unique one button physics puzzle game that puts you in control of a bunch of floating colored things that change shape. Really! As two friends gazed upon the peaceful night sky something terrible happened. Stars fell from their perches, leaving behind a glowing red void. And the only person/creature that can set things right is you. Time to get wobbling! 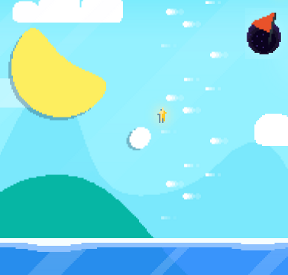 Levels in Little Luca are filled with objects the game itself describes as "wibbly-wobbly morphing" things. All you have to do is touch the forms to change their shape, using momentum and physics to catapult around the stage to collect stars and make it to the exit. Each shape morphs in a different manner when activated, leaving you some room to experiment and practice your timing before you get a perfect score. In later levels you'll unlock new things to play with, including gravity wells, tractor beams, whales, and maybe even a volcano.

The music and artwork in Little Luca deserves a mention, as both are spectacular in their own right. The game is a bit on the challenging side, but because everything in the world is so happy and cheerful, you never get frustrated, just motivated. Getting the hang of Little Luca takes some time, as it isn't your usual puzzle game by any means. But it's got all the ingredients of a solid mobile release, and you'll happily sit down and poke each little wobbly blob until the sky is filled with stars once again!