Little Noir Stories:
The Case of the Missing Girl

Ah, noir. The best things about this cheesy, much loved genre for yours truly aren't dames or hard-boiled detectives or even the classic red herring. It's crooks with names like Tony Fettucini or Big Louie the Hook. While Little Noir Stories: The Case of the Missing Girl is unfortunately lacking in that department, what it does have is a unique approach to the classic point-and-click mystery story, combining hidden-object hunting and puzzle solving with good old-fashioned gumshoeing... which, according to spellcheck, at least, is a word. How about... gumeshoelery? No? Too bad, I like that one better. Be warned, however; as entertaining as it is, Little Noir Stories will only run you a few hours of play. 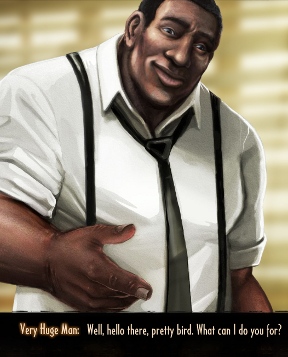 In the beginning, you play Anton Muller, a former police officer turned private investigator who works with a young woman named Amelia Chandler. When he gets a mysterious letter pointing him towards a dilapidated building and telling him to rescue a missing girl who may or may not even exist, he does what any well-trained private investigator would do; he heads out without weapons, backup, or letting his partner know where he's gone. He soon discovers that the building has been converted into a sort of makeshift apartment complex, and that its tenants don't appreciate him nosing around. After all, they all have their secrets, and they'd prefer that they be kept hidden.

The game actually gives you the option to play in Classic or Novel mode, the latter being more fleshed out with more dialogue. You interact with your environment with the mouse, clicking on objects or people of interest and solving puzzles to progress. Most of your hidden-object hunting typically consists of either finding objects a person wants, or searching a room to turn up evidence to support (or discredit) something they've told you. You'll occasionally be called upon to solve some fairly simple puzzles, all of which come with an option to skip them, but for the most part the gameplay is typical point-and-click; look for the items you need, and use them where you need to.

In a clever addition to gameplay, whenever you speak with someone, you'll be given a choice of response types to make (such as lying, being truthful, friendly, or intimidating), and it's a matter of figuring out the best approach to take with different characters to get the most out of them. In an amusing contrast, when playing as Muller's blonde bombshell female counterpart, the last two options are "charming" or "preachy"; way to stay in touch with my gender, game. It's like you know me. While picking the "wrong" option won't keep you from completing the game, it will cause some characters to withold information, and you won't learn all the "Secrets" they're hiding, which flesh our their stories.

Analysis: The Case of the Missing Girl really feels like it was originally intended to be a pure point-and-click game, and if it had kept along that track, it would have been so much better. The seedy atmosphere, the sketchy art, the different conversational tactics, all of it combines to make you feel like you're playing a real noir novel. The voice acting, when it exists, is fairly well done, and in fact I wish it had been more prevalent because it really added to the mood. Unfortunately, the hidden-object portions of the game are shoehorned in and feel out of place, as though they were only listlessly implemented because someone's girlfriend pointed out that hidden-object games are, like, popular and junk? Characters will occasionally tell you to hunt down objects for flimsy reasons, and the game is really hoping you don't notice that it's just busywork. 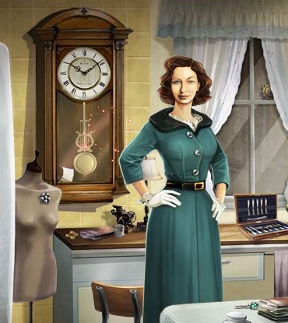 As far as the story goes, The Case of the Missing Girl has an appealingly Miss Marpleish vibe with its eccentric cast and convoluted story. The ending comes far too soon, and I would have preferred more time to chat with the various characters and interrogate them about what was happening. What's unfortunate is that in a misguided effort to make the gameplay accessible, Little Noir Stories takes an over-the-top approach to guiding you where you should be and what you should be doing. Everyone appreciates a nudge now and again, but because the game so blatantly tells you what to do, you never really feel that satisfying sense of accomplishment you would hope for with a game centered around sleuthing. There should be an option to toggle the OVER HERE DUMMY sparks and the directions that crop up at the bottom of the screen. But since there isn't, it's sort of like having your mother lay your clothes out for you in the morning. And you're twenty-five.

While not perfect, Little Noir Stories: The Case of the Missing Girl does something too few games of its kind are willing to do; it tries to be different, and that's a step in the right direction away from the endless tide of boring, cookie-cutter titles released every other day. The end result is a title that, while flawed, has enough character to stand apart from the pack. The story leaves room for a sequel, and I can only hope that it will be even better, and longer, than the original. As it stands, if you can forgive the extremely short playtime, Little Noir Stories: The Case of the Missing Girl is a bumpy but fun ride while it lasts, and features enough new ideas that, with a bit more polish, it could have been a real classic.

Note: Some players have experienced occasional freezes later in the game during saving. If exiting and restarting the game doesn't fix the issue, please contact Big Fish Games' excellent Technical Support for a speedy resolution.

I can't really blame them for the shoehorning. Right now, Hidden Objects are like the magic key that turns you from "obscure game left in the dust of the Lucasarts/Sierra collapse" to at least "obscure game with actual sales". I'd like to see more non-Telltale adventures that don't have me stop every ten minutes to find six humbugs and a drywall stapler but that's just not the way the market is right now.