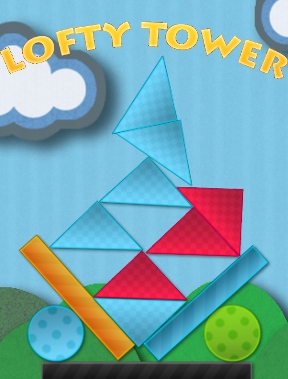 Lofty Tower, by Kornushin, is a physics/puzzle game about apparently creating precarious structures for someone with the worst standards for building safety codes I've ever seen. I'm going to go out on a limb and say you're probably not an architect. (Those of you who are architects are clearly cheaters and I'm not talking to you.) Luckily for you, you don't need any fancy degrees to win at this game; just a sharp eye and a steady hand. Those of you caught using gluesticks will be frowned on.

Your goal: use the shapes on the screen to create a stack that reaches the current level's height requirement, indicated on the right by a little blue flag. Click on a shape to pick it up and move it around, and click again to drop it. While holding one, use the [arrow] or [A] and [D] keys to rotate it. If any pieces fall off the platform you build on, you'll fail the level, and you can't grab a falling piece out of midair. Once you've reached the blue marker, your structure needs to hold for a few seconds before your success is acknowledged and you're granted access to the next level.

There's no time limit, so go slowly. Instead, your score is based on how high you manage to build your Frankenstein's tower. You can keep stacking past the required height to increase your score even further, but just remember what happened to Icarus, who built his tower of colourful shapes too tall in search of a high score, and when it toppled he had to start all over... what? Excuse me, I think I know how the legend goes, thankyouverymuch! 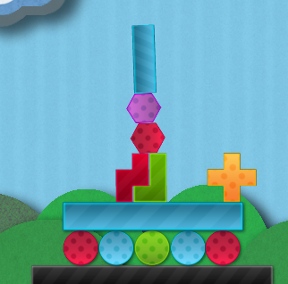 Analysis: In general, I tend to be more enamoured with story-centric adventure games or high-octane shoot-'em-ups, but when I do fancy a puzzle, I tend to be drawn to games that remind me of my childhood, sentimental sop that I am. Lofty Towers, with its kid-friendly, colourful presentation and simple to grasp but challenging gameplay brings to mind several older titles. All it's really missing is the "Best Friend Simulator", wherein a computer generated griefer breathes threateningly on the precarious structure during your turn while you try to protect it and shriek for an adult. (Why, how did you play Jenga?) The game is fun and nicely challenging with a variety of shapes that should be familiar to any of us Tetris oldsters and offer good building materials.

Thankfully, Lofty Tower's physics are fairly tame, and slightly bumping one piece against another does not result in the entire structure being flung violently into the sky, Team Rocket style. It's a relief to be able to shuffle pieces around and have them behave in a reliable fashion instead of being ridiculously sensitive as other physics-based games tend to do. Wait a second after placing a new shape, and your structure will usually settle unless you've done something particularly unsound. Of course, there's no "undo" button, and that, being coupled with your inability to rescue a falling shape usually means even the smallest missteps are usually disastrous, especially later on. (Most of my attempts at screenshots could probably be titled, "What now, smarty-pants?" or "This will not end well.")

Despite featuring a rather tortuously repetitive soundtrack (protip: the mute button is in the upper right corner, my MP3 brethren), the game is big, bright, cheerful, and with 30 levels, offers a nice chunk of play. While many of them require some fairly precise architecture to reach the height requirement, there are also a satisfying number of levels that leave wiggle-room for you to awkwardly jury rig your way to success, which is somehow more rewarding. It's not the flashiest game out there, nor the most complex, but sometimes all you really want to do is play with blocks.

"slightly bumping one piece against another does not result in the entire structure being flung violently into the sky, Team Rocket style."
I think I love you. (great review for a great game, by the way!)

Being asked to add them to my Facebook in order to view the walkthrough crosses a privacy line for me. I know I've seen it done once before and it was commented on negatively.

I'd have no problem if King.com asked me to create an account with them, although, I'd still think that to be quite unreasonable. They're already making advertising money off of my visit.

If King.com or other game sites are going to continue doing this, then I'd like to see JIG indicate by adding an "WRBFF" category (Walkthrough Requires Becoming a Facebook Fan). Or at least mention it in the review. Then I won't have to waste my time getting the unpleasnt surprise.

[We would prefer our community make their own walkthroughs and make them available for free, and without registration or other strings attached, here at JIG. You can even earn a free game coupon by posting a well-written (in your own words), well-formatted walkthrough that we post to our featured walkthrough section above the comments. That will always be our preference. -Jay]